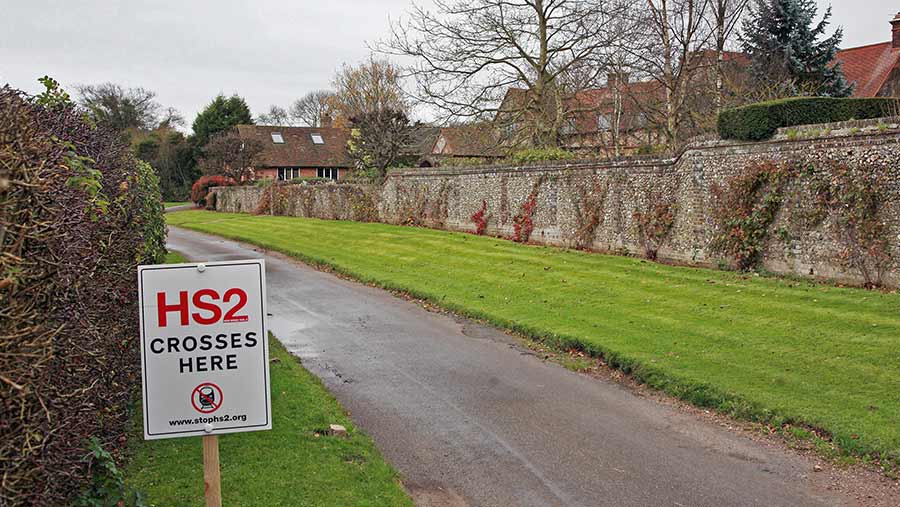 Farmers could have the opportunity to buy back land taken under compulsory purchase powers if the controversial high-speed railway project HS2 is abandoned.

In August the UK government launched a review of HS2 which is due to report back this autumn and which could see the multibillion-pound development scheme scrapped.

HS2 Ltd already owns large swaths of land up and down the route, which would link London, Birmingham, the East Midlands, Leeds and Manchester, through completed compulsory purchase orders – a legal function in the UK and Ireland that allows certain bodies which need to obtain land and property to do so without the consent of the owner.

Thousands of people have had to give up their homes, businesses and livelihoods, and some farmers have had to wait up to 10 years for compensation payments.

In the meantime, the project’s predicted cost has increased from £32.7bn to £88bn, taking it £26bn over the most recent budget of £62bn.

HS2 has insisted it is business as usual until the review’s result is known, although the clearing of ancient woodland along the route has been paused, with transport secretary Grant Shapps acknowledging that some works “cannot be undone later”.

What can landowners do if HS2 is scrapped?

If the railway project is formally abandoned, a set of principles called the Crichel Down Rules apply to the land owned by HS2 that it considers surplus.

If a property has been compulsorily purchased but is not due to be demolished or developed for a number of months or years, it may be rented out. If this happens, the tenant then has the right to purchase under Crichel Down Rules rather than the original owner.

However, if the landowner or successor is not in a position to buy the land back, HS2 will be free to sell this land on the open market, or to retain it.

If the land has fundamentally changed in its character (for example, where a house has been demolished; farmland has been changed to other uses; or woodland has been clear felled), the rules do not apply and the land does not need to be offered to the previous owner.

The rules will be of no assistance to landowners who sold to HS2 in the early days of the scheme and during the “need to sell” phase, before there was any formal threat of compulsory purchase.

Will it be abandoned?

It is distinctly possible that the HS2 railway will be abandoned, says Alastair Frew, a partner in law firm Lodders’ real estate team.

However, he said another option was that the railway would be downgraded from “high speed” to save money and simplify the route’s development.

Compulsory purchase compensation rates are supposed to be based on the current market value but by the time a farmer may be looking to buy land back, the market value could have changed significantly.

Where the railway was expected, Mr Frew said development had increased, meaning prices had gone up.

Meanwhile some farmers are out of pocket, still awaiting their full compensation payments years after their land was taken.

“I predict that the stretches of HS2 route that pass through open countryside will largely return to the person who originally owned it,” Mr Frew said.

“Land nearer London is going to be massively valuable and the former owners could find themselves outpriced.”

Landowners who are still in the area and able to afford to buy it back may be able to reassemble their farm and their family home, albeit after a potentially lengthy valuation wrangle.

Kate Russell, policy and technical adviser at the Central Association of Agricultural Valuers (CAAV), thinks it is unlikely the project will be abandoned.

She said the HS2 review was a worry for all involved and the vague deadline meant the report could come any time before Christmas – and that was without a general election throwing more uncertainty into the mix.

“It is likely that land purchases will continue but many of these are blight notice cases where the seller wants to sell now and move away,” she said.

“Where these negotiations are advanced they may very well want to continue and get on with it, to have certainty.”

Some farmland is also being acquired in Phase 1 (London to West Midlands) but the use of general vesting declarations – notices served on owners when a compulsory purchase scheme needs land – means that it will be difficult for farmers to resist this process or slow it down.

The possibility of the scheme being abandoned and then picked up again in the future would be a major concern for those along the route, Ms Russell said.

“Living under the shadow of HS2 with the fear that it may be revived in the future will have a very serious detrimental impact on property values with no prospect of compensation – just about the worst-case scenario,” she said.

Most farmers involved would already have a land agent, with whom they should stay in touch, but no one should expect to hear much until later in the year, she advised.

Lack of early engagement
The developer is supposed to hold extensive upfront consultations with those affected before it submits a development consent order application to the planning inspectorate, but in reality it won’t have much of a budget to do this work so it tends to be done on a shoestring. In particular, the developer is obliged to pay professional fees so that affected parties get the advice and support they need at the start, but can be reluctant to do this.

Borrow pits
This was an issue on the A14 and will also arise in HS2 phase 2a (West Midlands to Crewe). Where the acquirer needs specific minerals (such as gravel or clay), they may try to acquire suitable sites by compulsory purchase as part of the scheme. The acquirer may be reluctant to pay full value for the sites, arguing that the minerals would not have been worth anything if the scheme had not been developed – ignoring the fact that the minerals could stay in the ground for another decade or century until required for some other purpose.

CaMkOx Arc
Now known as the Oxford-Cambridge Arc, this includes a new East-West Rail line connecting Oxford and Cambridge by 2030, and the accelerated development of the Oxford to Cambridge Expressway.

A goal of the project is to deliver one million new homes in the corridor by 2050, with the development of up to five new towns or villages.

The East-West Rail line between Bedford and Cambridge has been declared a Nationally Significant Infrastructure Project by the government, meaning it can apply for a development consent order to authorise it taking land.

Five possible route options have been consulted on and a full report is expected to be published later this year.

A303 Stonehenge tunnel
The A303 past Stonehenge is part of the most direct route between the south-east and the south-west, and average traffic flows along the single-carriageway section between Amesbury and Berwick Down reach twice its design capacity.

To improve this route, a dual carriageway (running through a tunnel near Stonehenge) has been suggested but this has received objections from a long list of opponents, including Unesco, local farmers and druids.

The planning application is with the planning inspectorate, and Highways England plans to start work in 2021, should consent be granted.

A9 dualling dispute
The Scottish Government’s £3bn plan to dual the A9 has received formal objections from Network Rail and farming and fishing businesses in Highland Perthshire.

The government’s Planning and Environmental Appeals Division will hold a week-long inquiry from 4 November to agree on a way forward.

Strutt & Parker says landowners in the area could be significantly affected by compulsory purchase orders and development disruption.

It is expected that the planning inspectorate will make a decision on the plans in the next few months.