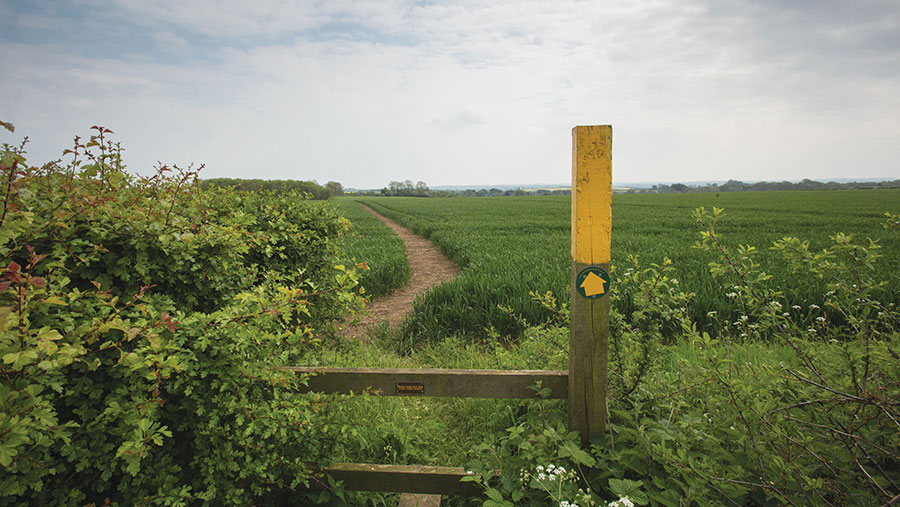 The public has embraced walking in the countryside after it became one of the few forms of exercise allowed during the pandemic lockdowns.

However, this has thrown up access and trespass issues for landowners and tenants.

He says the best solution is to find a way to work with the public while also protecting land rights and safeguarding businesses from public liability claims.

“We may much prefer to have nobody come onto our land, but I suspect it is something a lot of us will have to deal with,” says Mr Coulman.

Educating the public on how to use the countryside and on what is and is not acceptable is an important first step.

Make it easy to use publicly accessible areas

Reducing challenges to public access helps lower the likelihood of conflict with users.

Pippa Langford, principal specialist for recreation and access at Natural England, advises farmers to “think like a walker, a dog walker, or someone with children”.

Start with good signposting and waymarking, and ask someone who doesn’t know the path to walk it and to suggest any necessary improvements, as this will stop people from wandering onto areas where they shouldn’t be.

If a path crosses an arable field, consider leaving a surface to clearly define the route to stop people spreading onto the field, or alternatively provide some visual clues such as laying sticks along the path, says Ms Langford.

“If people are not staying on a path that goes across a grass field, mow the line of the path because walking through long grass is not what people do.”

What is my duty to trespassers?

Although a landowner or tenant’s duty to a trespasser is more limited than it is to people who have permission to be there, there is still a reasonable expectation in law to offer protection, according to senior solictor Tom Hickingbottom at Wilkin Chapman.

In damages claims by trespassers, age is taken into consideration, he says. “If children are frequently trespassing and if there is something potentially attractive for them on the land, that will be taken into account.”

Fencing is the greatest deterrent, but if this is not possible, signs are helpful.

What are my rights if people stray from footpaths?

Legal remedies are limited and enforcement is difficult if there are no fences to guide people on the route of the path.

Mr Hickingbottom says if local people are straying onto a specific route, granting a permissive right of access can be an option to allow that situation to be controlled, if it doesn’t interfere with farming operations.

It is important to replace signs that have been moved to stop a new right of way being created by default on the land where people stray on to.

Under Section 31 of the 1980 Highways Act, landowners are protected against right-of-way claims if plans with public rights of way marked on them are deposited with the local authority; this stops the clock from ticking on the time period in which a new route can be created.

Do I need insurance cover for unregistered vehicles?

Linda Davy, senior account executive at insurance broker Marshall Wooldridge, advises farmers to consider adding unregistered vehicles such as quad bikes, scraper tractors and diggers to their motor fleet insurance, instead of relying on their farm policy to pick up liability for injuries to a third party on their land or damage to property.

Ms Davy says European law on this has changed following an incident in Slovenia in 2014 when a person was hit by a tractor and trailer while working on a building.

In February 2021, the UK government said it would not introduce this legislation, but there could be ramifications for farmers, says Ms Davy.

She recommends a “belt-and-braces” approach.

“If the government proceeds to remove the Vnuk case from UK law, there is no guarantee that the effect of the case will still be felt, as specific legislation will be required to end the Motor Insurers’ Bureau’s liability for uninsured vehicles on private land.

“Until this happens, all vehicles should be covered under a motor policy to prevent a vehicle being uninsured in certain situations.”