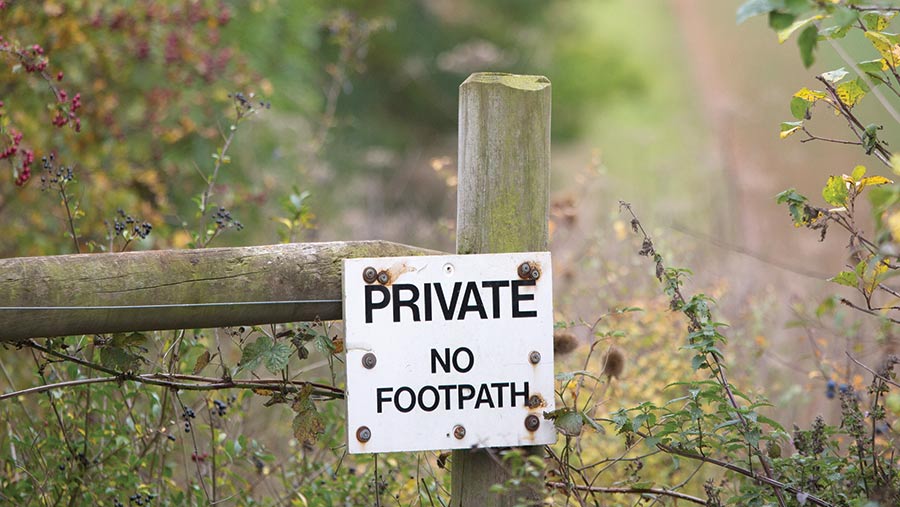 Landowners should take active steps to prevent members of the public accessing private land, to help prevent new rights of way being imposed on farms, including submitting ownership documents to the council.

Jim Cribb, rural surveyor at Robinson & Hall, says the process of submitting an application to the local authority is fairly simple and provides security that the farm is protected for 20 years.

Without this protection, farmers are vulnerable to members of the public claiming rights over their land for walking, riding horses or riding bicycles.

See also: Farming near footpaths – the law for arable farmers

It is a legal requirement for the landowner to maintain these designated paths, such as keeping a minimum width clear, and cross-compliance requirements also have to be taken into account, as any breach will result in a payments reduction.

How can a new right of way be claimed?

A new right of way can be claimed if a route has been used for at least 20 years without interruption, as long as it was used without secrecy, force, or the landowner’s permission.

If this use is restricted to one person, this can be claimed as a personal right and can become a private right of way. This must be registered on the details of the two parties through the land registry, and maintenance obligations will depend on the use and what was agreed.

If multiple people are using the route, a new public right of way can be claimed. Evidence, such as photos or anecdotes, must be presented to prove how it has been used.

This is a common problem for landowners, says Mr Cribb, particularly those who own a large acreage and cannot regularly monitor all of it.

“We deal with this several times a year on a more official basis and general difficulties with third parties are more difficult to quantify, but I’d be very surprised if any farmer didn’t have this issue to an extent,” says Mr Cribb.

“It happens everywhere but it tends to be more of a problem around built-up areas as there are more people who might want to walk their dog and they don’t venture very far.”

How can this be prevented?

The onus is on the landowner to prove they have actively tried to prevent third parties from accessing their property.

This can be done by:

Part of this submission will be a map of the farm with the existing rights of way marked, and the landowner should state that they do not wish any more footpaths to be designated over it.

The council will then present this publicly for any objections. If there are no objections, the farmer can submit a document requesting that the land be protected from new rights of way for 20 years.

However, this does not offer protection for any existing claims.

Before the 20-year period concludes, the landowner should submit a new document stating that nothing has changed and requesting that the cover be rolled out for another two decades.

If the land has changed hands within this time, the new owner can still request the renewal based on when their predecessor made the submission.

However, if the cover expires, the full process will have to be carried out again.

“The process is relatively simple and none of my clients have had disputes arise during it,” says Mr Cribb.

“If possible, address any issues beforehand. If you know who is using a route, write to them and state you do not give permission for them to walk across this land and take steps to stop it.”

Putting up signs
Erecting a sign or notice that explicitly states that public access is prohibited can be effective but it must be maintained and sited near the land it is looking to protect.

Preventing access
Locking gates or blocking the access to the route makes it clear the land is not for public use. There are no consequences for blocking private land but if the area is subject to an existing claim, this could cause a dispute and trigger the legal process.

Granting permissive rights
If the landowner is happy for the public to use a route, they can grant permission temporarily which then prevents claims seeking a permanent right of way.

It is important to document permissive paths and also to erect signs on the land confirming that use of the route is by permission.

Can a right of way be withdrawn?

It is possible to withdraw or divert a right of way but it is not something to be entered into lightly because it can be difficult and costly.

Mr Cribb had a client who was presented with a £5,000 legal bill for diverting an official path from diagonally across a field to along the hedge, despite no objections from any local consultees.

Right-to-roam law introduced in 2000 states that any pre-1949 rights of way that are not on official maps must be recorded in the next seven years or will no longer be protected.

From 1 January 2026, footpaths and bridleways that are not recorded on the local authority’s definitive map of rights of way will cease to carry public rights.

To claim an unrecorded right of way, a definitive map modification order can be made free of charge to the local county council or unitary authority.