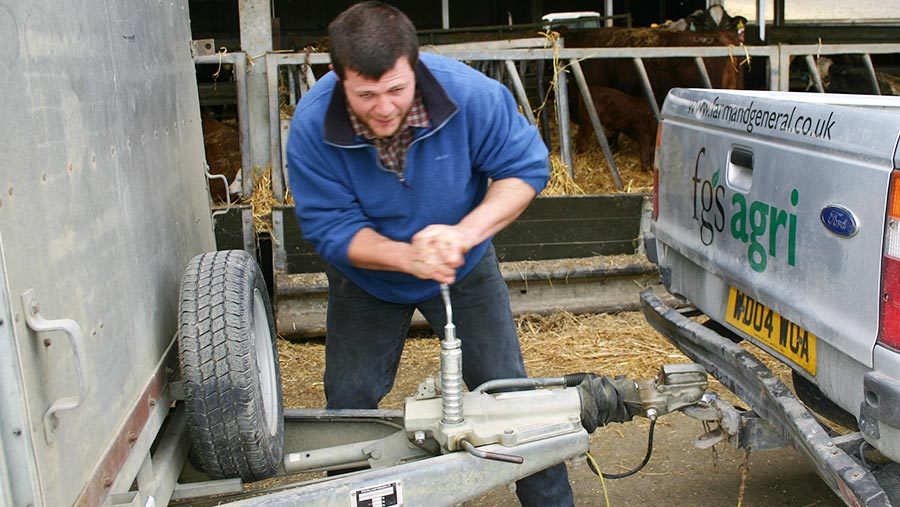 Anyone involved with farming is used to taking the odd machinery test or two.

ATVs, chainsaws and telehandlers are considered dangerous enough for you to have to get a licence before you’re allowed to jump on board and turn the key.

And if you do much towing on the road, are under the age of 33, and don’t want to land yourself in trouble with the law then you can add your trailer test to the list, too.

We’re talking here about the sort of trailers that you’d pull behind the farm pickup or 4×4, that is stockboxes, low-loaders and other trailers. It’s got nothing to do with tractors and grain trailers.

As the youngster on the Farmers Weekly machinery desk I was given the task of getting my trailer test – the so-called B+E trailer licence. The ‘B’ part is your car licence, while the ‘E’ refers to the trailer side of things.

You’ll need it if you passed your car test after 1 January 1997 and you’re going to be towing a trailer behind a car on the road.

The rules do seem illogical. My granny, who passed her test long before 1997, is, perfectly entitled to pull a trailer behind her Kia Sorento up to a combined weight of 8.25t (assuming the car’s towing capacity allows it). That’s despite the fact that she’s had no experience of towing whatsoever.

In comparison, the biggest trailer I’m allowed to tow is a 750kg wheelbarrow, even though I’ve spent more hours than I care to remember charging around with trailers almost 10 times that weight (and the odd under-the-radar pickup and Ifor Williams trip, too).

And it’s not just the UK that is subject to these regulations. The deal is the same on the Continent – France, Germany and Holland all require you to have a certificate if you’re going to lug more than 750kg on the towbar and take to the road.

Scouring the internet revealed several companies that offered training in my area. You can do the training alone or sign up with a partner, but not all car test centres are able to cater for trailer tests. In fact, there are 59 centres in the UK suitable for taking your B+E.

I plumped for a nationwide firm called J Coates for no other reason than its website looked pretty professional. But there are plenty of firms out there.

The training can be costly. My eight hours of training and the use of a Ford Ranger pickup and slightly tired trailer cost £574, not including the test itself. The trailer must be a high-sided one, too.

I was told I should have two days of training (though they weren’t long days) before my test on the third day. I spoke to several companies, most of which insisted that I would need three days of training, irrespective of how experienced I was at towing. Some even offer a £70 assessment session to work out exactly how much training you might need.

You can practise on the road with anyone who passed their driving test pre-1997 or who has held their B+E for more than three years, provided you display L plates.

The training is real back-to-basics stuff. If you’ve taken your car test recently then you stand a good chance of passing – it’s all about kicking bad habits such as crossing your arms when turning and keeping both hands on the wheel.

Most of my training time was spent learning how to pass the test – checking mirrors every time you change gear, brake or turn a corner. Pretty brain-numbing stuff

I found the test so car-biased that you don’t learn about how to load the trailer, set tyre pressures or strap loads down safely.

When it comes to the big day, allow about an hour and a quarter for the test. This will include some very basic questions – how to top up your washer fluid, check your engine oil and so on. There’s no formal theory test, though.

The first part of the test involves a reversing manoeuvre. If you’ve had plenty of corn-cart experience this will seem pretty Mickey Mouse stuff. Just back yourself into a make-believe garage without hitting any cones or straying outside the lines.

Next is a 50-minute road route. Mine took in a motorway section, a one-way system and a few rural lanes. You’ll also have to pull over a couple of times and show that you can do a hill start without rolling, but it’s all run-of-the-mill stuff.

Once that’s done you just have to demonstrate that you are capable of coupling/uncoupling the trailer. It’s a simple case of remembering a routine.

The scoring is done just like a car test. That means you can amass up to 15 minors before you fail the test. However, commit one major fault and it’s game over.

Should you take the test?

Flouting the rules is quite tempting. There’s serious dosh to be saved from not bothering with the test – particularly if you only tow on the road now and again. It is the law, though.

The trick might be to have only as many lessons as you need – you could potentially cut the training down to four or five hours with the test following it. And, if you have a vehicle and high-sided trailer to use in the test, you could trim your training and test fee down to about £300.

It seems expensive, but how does the trailer test cost stack up against other farm-related training and test schemes?

What not to do