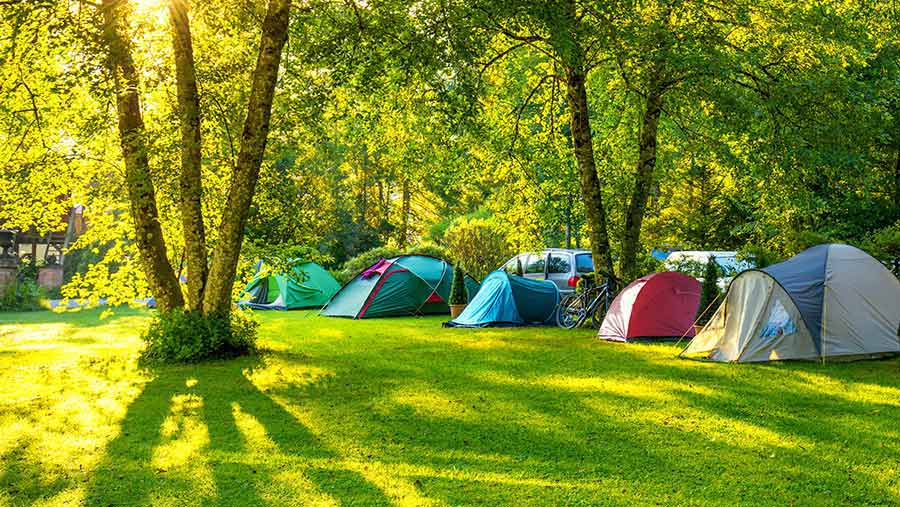 Rural, farming and leisure groups have joined forces to call for a further extension to rules allowing farms to use land for non-agricultural ventures.

Permitted Development Rights (PDR) allow farms to temporarily set up campsites and events without requiring full planning permission. In the past, the allowance extended to just 28 days in any one year.

However, in 2020, the government doubled the allowance to 56 days to help businesses survive and recover from the Covid-19 restrictions. The move was successful particularly for pop-up campsites on farms which made an average of £12,500 in extra income last year.

In January the government announced PDRs would remain at 56 days to help boost recovery further. However, six groups (see box) have launched a joint-campaign to have PDRs increased to cover the entire period up to the October half term.

The Carry On Camping campaign said that PDR extensions had boosted the wider rural economy with campers spending an average of £46 a day in the local community.

As well as the financial benefits, the extra time being called for would help offset wasted days where profit could not be made. These could be due to bad weather, midweek lows or the construction and removal of temporary structures.

The campaigners suggested weekends with bad weather accounted for six days, midweek lulls 20 days and structure changes four days, so the total of lost days and could amount to 30 lost earning days subtracted from the 56-day period.

The group also called for a suspension in campsite licensing requirements which operate under separate, long-standing legislation.

Regulations restrict the operation of tent campsites to 60 days a year in total and 42 days consecutively, unless sites apply for a camping licence from the local authority.

In a joint letter to Department for Digital, Culture, Media and Sport minister Oliver Dowden, the signatories called for an urgent response to their calls to ensure businesses were able to capitalise on the staycation boom.

One farm that has benefitted from 56-day PDRs is Hundred Acre Farm, Compton, West Sussex.

The site took about 350 bookings over the 56-day period, generating thousands of pounds of extra revenue.

Ms Shardlow said visitors had taken great interest in the working farm and asked about how the farm operated and wanted to learn more about it.

Mr Bray added that managing the farm around the campsite had not been a problem, even during harvest. The couple has invested in a wild camping experience in a woodland area of their farm, in anticipation of opening up again this year.