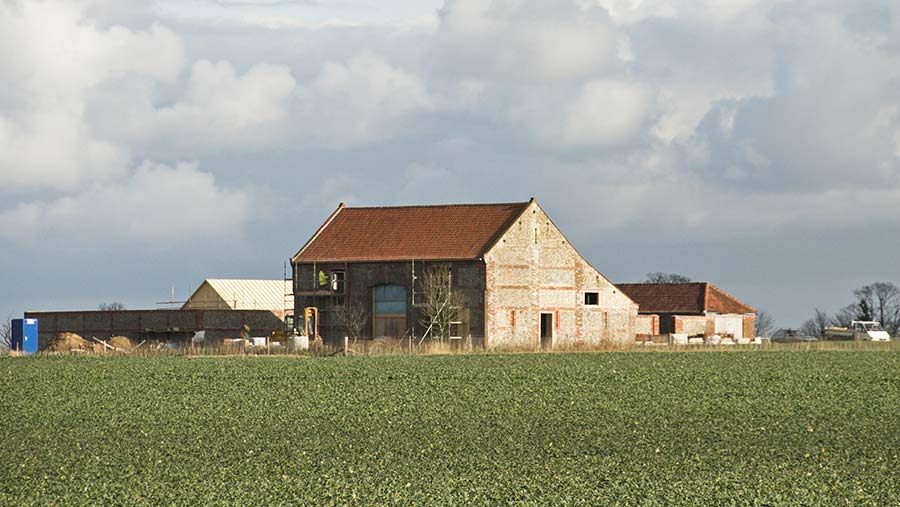 In April 2014 it became permitted development in parts of England to change the use of an agricultural building, and any land immediately surrounding it, to residential.

This is known as a Class Q development, and is set out in Part 3 of Schedule 2 of the General Permitted Development Order 2015 (GPDO).

It also allows for reasonably necessary building operations to convert the building, but where planning authorities draw the line between what constitutes a conversion and what is a rebuild, and therefore not a permitted development, varies considerably across the country.

In November last year, a High Court judgement, “the Hibbitt case”, had a profound effect on the approach to permitting residential conversions of agricultural buildings. Chartered surveyors Barry Davies and Tony Kernon explain why.

The Hibbitt case related to the conversion of a steel-framed, open-fronted mono-pitch barn measuring 30m by 8m, located in Nottinghamshire. Rushcliffe Borough Council refused the application on the basis that the works did not constitute permitted development.

The applicant appealed to the planning inspector, who agreed with the council and dismissed the appeal.

The inspector concluded that the works proposed went “well beyond what could reasonably be described as a conversion”.

Mr Justice Green, the judge in the High Court case that followed, referred to as Hibbitt v Secretary of State for Communities and Local Government (1) and Rushcliffe Borough Council (2) [2016], also agreed.

What was being challenged was a point of law, not the factual finding by the inspector that the work constituted a rebuild and not a conversion.

The effect of the judgement on Class Q applications has been considerable, and varied. Eleven months on, and with many “Hibbitt” based refusals having gone to appeal, what is the verdict?

The Hibbitt judgement said that “there will be numerous instances where the starting point [the agricultural building] might be so skeletal and minimalist that the works needed to alter the use to a dwelling would be of such magnitude that in practical reality what is being undertaken is a rebuild”.

That would suggest that where walls and roofs are being replaced, even though the steel frame is being kept, as was the case in Hibbitt, the works will go beyond a conversion and so will not be Class Q permitted development.

In February 2017, in its summary of responses to the Rural Planning Review “Call for evidence”, the Department for Communities and Local Government stated that it will revise planning guidance to clarify for applicants and local planning authorities what constitutes building operations reasonably necessary to convert an agricultural building to residential use.

Updated guidance cannot come a moment too soon. There is huge uncertainty with both local planning authorities and advisers as to where a conversion, permissible under the GPDO 2015, becomes “more than a conversion” and so falls outside permitted development.

In some cases, repairs or re-roofing proposals have been considered to be extensive building operations that amount to more than a conversion.

Similarly, in some appeals, works to what are basically open sided barns have been considered not to be permitted because it goes “beyond a conversion”.

But in other appeals the complete recladding of exterior walls, and the recladding of the roof, have been held to comprise only works “specifically within Class Q1” and consequently fell within Permitted Development Rights (PDR).

Yet the GPDO explicitly allows for “the installation or replacement of… roofs or exterior walls”.

The impact of the Hibbitt case and what it means for Class Q PDRs has fuelled further inconsistencies in the approach by planning authorities to such applications and hence the process has become something of a lottery.

The government’s promised guidance will be welcomed.

Before submitting a PDR Class Q application for conversion of an agricultural building to residential: