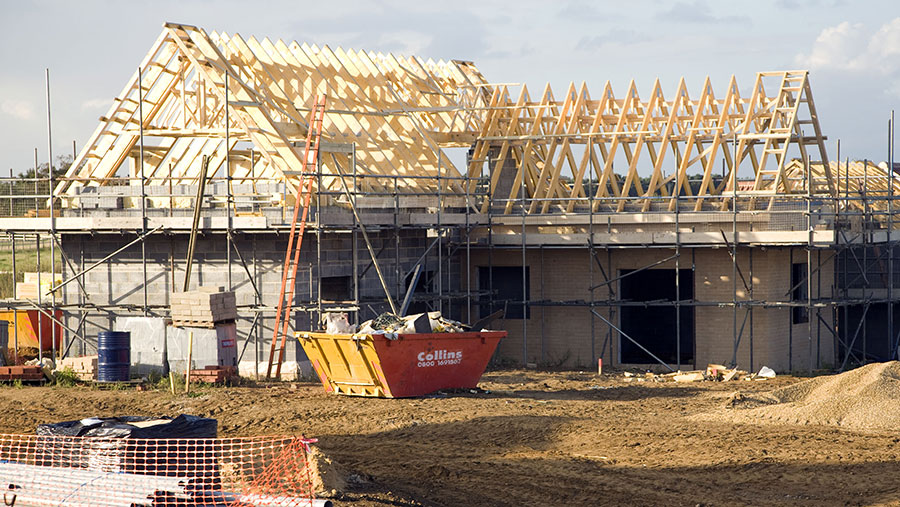 Government proposals and increased pressure for housing could pose risks for farmers and landowners, an adviser has warned.

Planning and housing consultation papers, released on Monday (5 March) have the potential to transform existing planning policy and prices paid for development land.

Landowners could lose out in this drive for more land for housing and other uses, warns Jeremy Moody, secretary and adviser to the Central Association of Agricultural Valuers (CAAV).

“There is a lot more talk around compulsory purchase and payments being made on existing land use value rather than including any sort of market element,” said Mr Moody.

“This clearly tramples on private landowners’ rights. It will be important to watch any future developments very closely.”

Speaking at the CAAV spring conference in Cheltenham on Wednesday (7 March), Mr Moody said significant levels of housing and infrastructure is needed for the growing population.

“By 2033 there could easily be another 10 million people on these islands,” he said, suggesting one million would be in London and the rest between York and Poole.

“One of the key thrusts of the consultation paper is to capture some of the uplift in development land value and use it for other infrastructure.”

In response to complaints about planning negotiations at local level adding cost and causing hold-ups, the government has said it will hand compulsory purchase powers to a new body called Homes England.

Mr Moody said councils and developers are “targets” for increasing the building of housing.

Councils are already being penalised for not meeting development targets, by having their targets raised, and developers have been called out for receiving permission to build and then not starting the project for months or even years.

Viability assessments could be brought forward to the early planning stage, to rule out sites which are too costly to develop, while there will also be a greater emphasis on small sites, with 20% to be 0.5ha or smaller.

Green belt protection will remain but the government will take more of an interest in developing new towns, up to five of which could be created in the Oxford to Cambridge corridor. This is where landowners could see their private rights come into question, the CAAV warned.

“There is a lot more talk around compulsory purchase and payments being made on existing land use value rather than including any sort of market element,” said Mr Moody. “This clearly tramples on private landowners’ rights. It will be important to watch any future developments very closely.”

The Campaign to Protect Rural England (CPRE) has given a “cautious welcome” to the planning review but fears precious countryside could be destroyed unnecessarily by increasing housing numbers according to market demand.

CPRE wants to see a revised planning policy that gives stronger direction on where development goes and makes the best use of land, meeting communities’ needs and redresses the imbalance of power between communities, councils and developers.

Interested parties have until 10 May to submit their responses. The NFU is calling for farmers and growers to put forward their case about what they want to do with their land before plans are finalised.

The NFU said key for farmers are changes which could allow rural workers taking over a farm business to have a house on farm; to allow traditional farm buildings to be converted to dwellings and for larger residential properties to be subdivided.