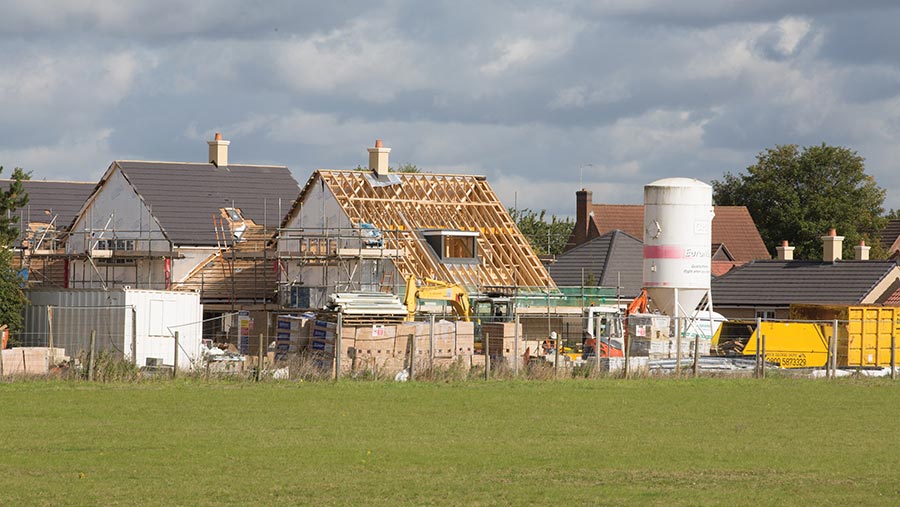 Government plans to shake up the planning system in order to create more and better houses are welcome but risk leaving the rural community behind, say experts.

This month sees the conclusion of two important consultations: Changes to the current planning system, which closed on 1 October, and Planning for the future, ending on 29 October.

The second consultation has had more attention – proposing the biggest change to the planning system since it was put together in 1947 – but the first will determine where development will take place, says Jeremy Moody, the Central Association of Agricultural Valuers (CAAV) secretary and adviser.

“This decision is politically very contentious, even within the governing party, which raises a question about how much that is currently included will survive,” says Mr Moody.

“It proposes changing a lot of things people have taken for granted, but it faces a difficult political passage before it takes its final form.”

What’s wrong with the current system?

Zone-specific planning, where certain sites are proposed for development and approved or denied by the local council, is unique to the UK.

“The councils will say ‘we give lots of permissions’ but the system is not producing enough permissions, plus it is complex and the process takes time and effort to deal with,” says Mr Moody.

“This means we have limited permissions on limited land, squeezing in expensive houses with small rooms, and the price of land is going up.”

Even when permission is granted, not all plans come to fruition, with just 1.5m houses being built from the 2.5m granted permission in the past 10 years.

The government’s housing delivery target is 300,000 homes a year, but in 2019 the total reached just 240,000. Meanwhile, the shortfall is making it difficult for people to find a home, with house prices and rents steadily rising.

The first consultation document proposes local authority areas being told how many houses they have to build, based on the ratio of the location’s average house price to the average salary.

“An area such as the South East, where they object the most to development, will thus have a higher target, upsetting its councils and its MPs, so there’s going to be plenty of discussion about this,” explains Mr Moody.

Next, under proposals included in the second consultation, a council will need to divide its area into three zones: protected (green belt, areas of outstanding natural beauty, flood risk areas, open country); renewal (brownfield, village envelopes); and growth (where homes will be built).

This designation will be equivalent to planning permission in the whole growth area, cutting out the process of site-by-site consideration.

As long as the developer creates a proposal that fits the design code for the area, building can begin.

“Councils will say this is the death of local democracy, but their big decisions now will be working out where the growth zones are and determining the design code, which could get quite political,” says Mr Moody.

Councils are also responsible for delivering the local nature-recovery strategy, including increased biodiversity, as outlined in the Environment Bill and the upcoming Environmental Land Management scheme.

“Greenfield areas are likely to be included in the growth zone, for space, and brownfield sites are more expensive to develop,” says Mr Moody.

“There is nothing in the proposals that will necessarily protect the best and most productive agricultural land.”

The government has proposed a national levy that would replace both the Community Infrastructure Levy (CIL) and planning conditions known as Section 106 agreements.

CIL has long been controversial for being inconsistent across local authority areas and in some imposing large fees on agricultural building developments, which many feel should have been exempt.

This system should be fairer, according to the government, and may result in no levy being due for agricultural buildings.

With the consultations ending in October, new legislation needing to be processed and councils given 30 months to create their three zones, it’s likely the proposals won’t come to fruition until late 2024.

“In the meantime, what will this do to the development market? Do people hang back or do they try to rush it? What will lenders for developers’ finance think of this? Where are the builders and other tradesman for this increase to 300,000 houses?”

What the experts say:

“Rural businesses need support to expand or diversify. We must avoid decisionmakers saying no to development in protected areas as default.

“The process does need to be simplified for timescales to be met. Planning departments also require investment to ensure the resources are in place.

“We wait to see whether merging authorities is the answer. Overall the aims are welcomed, but the emphasis is on urban areas. The countryside must not be forgotten in terms of its ability to provide housing, income, employment and ‘greening’ benefits.”

“About 60% of local planning authorities do not have an up-to-date local plan and many will be reluctant to start one in light of the uncertainties raised by this consultation.

“Given the requirement for all local authority areas in England to produce a new-style local plan within a 30-month timescale, it is highly likely they will wait for further legislation to be in place before commencing.

“In the meantime, decisionmaking is likely to slow down significantly, leading to more delays and uncertainty – affecting investor confidence – and more applications going to appeal.”

Jonathan Roberts, director of external affairs at the CLA

“By not including the countryside in the ‘growth’ category, the government is ignoring the rural economy’s huge potential. We know many individuals and businesses are wanting to escape to the countryside.

“We also have many farmers desperate to convert disused buildings into modern office space, but they are being restricted from doing so by a planning system that appears designed to hold back the economy.

“Now is the time to revive the rural economy by facilitating job creation and growth.”

“Regulatory change needs to happen in a simple and efficient way, that does not overburden already poorly resourced local planning authorities, and at a cost business can afford.

“This is a start to planning reform, but it is yet to be seen how it will secure a sustainable future for rural economies and deliver the homes, diversification and innovation we need on farm.”

“My concern is that if rural enterprises fall under the protected zone, no support will be given for developments. Perhaps the framework could offer exemptions to allow development in certain industries?

“We encourage the government to strengthen existing agricultural restrictions on dwellings to ensure these houses are available to meet the needs of retiring farm tenants, in particular, and protect the restrictions by statute so they cannot be removed.

“Any new planning arrangements must protect tenant farmers from being evicted from their holdings just to provide landlords with opportunities to develop land outside agriculture.”

“The proposals should reduce the differences between local planning authorities. At present, for example, one farmer could convert their buildings to dwellings while a neighbour in a different local plan area could not.

“I have concerns about the introduction of requirements, rather than targets, for applications to be determined in a set time. If the opportunity to provide extra information is curtailed because of time limits, it may be that withdrawal or refusal are the only options left.”

“Planning and development is intrinsically tied to land availability. With the government being staunch on their policies of no greenfield and greenbelt development, RICS recommends the introduction of a new land classification: amberfield.

“This would create a pipeline of ‘ready to go’ land, increasing housing supply and promoting development opportunities. Amberfield would be brownfield land that is ready to be built on without any cleaning up or decontaminating.

“Local authorities will have to label a set number of sites as amberfield, in line with their housing need. This would help meet local housing needs and create a five-year land supply that works for communities and builders.”