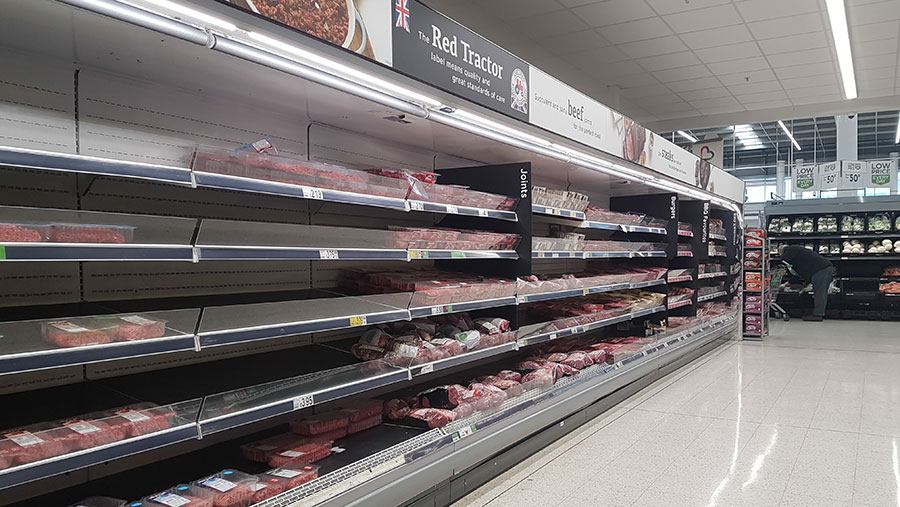 Farm union leader Minette Batters has warned Boris Johnson to expect a return to panic-buying unless his government acts now to alleviate crippling labour shortages in the food supply chain.

NFU president Mrs Batters wrote to the prime minister on Wednesday 22 September, warning that the industry remains on a “knife edge” due to the shortage of workers across the entire supply chain.

The letter, supported by a dozen food and farming organisations, called for the introduction of a 12-month Covid recovery visa to allow companies to recruit overseas workers as a short-term response to the labour crisis.

“The situation is not improving – in fact, images of empty supermarket shelves are becoming commonplace as labour shortages bite,” Mrs Batters wrote.

“As we move towards Christmas, there is a substantial threat of food inflation directly affecting the poorest families.

“That is why the entire UK food supply chain, from farm supply to retail outlets, is united in calling for an emergency Covid recovery visa to open up new recruitment opportunities as a matter of urgency.

“Without it, more shelves will go empty and consumers will panic-buy to try to get through the winter.”

Reports of UK food producers throwing away perfectly edible food because it cannot be picked, packed, processed or transported to the end consumer was a “travesty”, she added.

“Every day there are new examples of food waste across the industry, from chicken to pork, fruit and vegetables, dairy and many other products,” said Mrs Batters. “The food is there, but it needs people to get it to the consumers.”

The government expanded its Seasonal Workers Pilot (SWP) from 10,000-30,000 workers this year. But the NFU says this has not gone far enough to fill the 80,000 seasonal workers needed on UK fruit, veg and flowers farms to pick and process the crops.

The 12 organisations are seeking a commitment from the government to make the scheme permanent to ensure it is large enough to cope with the industry’s workforce needs.

A joint industry report, published this summer, estimated that there are about 500,000 unfilled vacancies in the food and drink sector.

And the Road Haulage Association has estimated that the UK is struggling with a shortfall of about 100,000 HGV drivers, as thousands of EU drivers have not returned due to a mix of Brexit and the coronavirus pandemic.

The letter was signed by the NFU on behalf of the British Meat Processors Association, the British Poultry Council, the National Pig Association, Food and Drink Federation, Dairy UK and others.

Meanwhile, the government has reached a deal with US-owned CF Fertilisers to restart production of carbon dioxide gas in UK factories, used primarily in the food sector including for packaging and to stun animals at abattoirs before slaughter, to avert a supermarket stock shortage crisis.

Defra minister of state Victoria Prentis outlined the government’s response to the supply chain issues in response to a written parliamentary question on the matter.

“The UK has a highly resilient food supply chain, as demonstrated throughout the Covid-19 response. It is well equipped to deal with situations with the potential to cause disruption,” wrote the minister.

“Our high degree of food security is built on access to a range of sources, including robust supply chains domestically, and from other countries, including supplementing our excellent domestic production of fresh vegetables and fruit with imports of produce that cannot be grown here for all or part of the year.”

She added: “Defra has well-established ways of working with the industry and across government to monitor risks that may arise.

“This includes extensive, regular and ongoing engagement with food retailers in preparedness for, and in response to, issues with the potential to cause disruption to food supply chains, including those for fresh produce.”