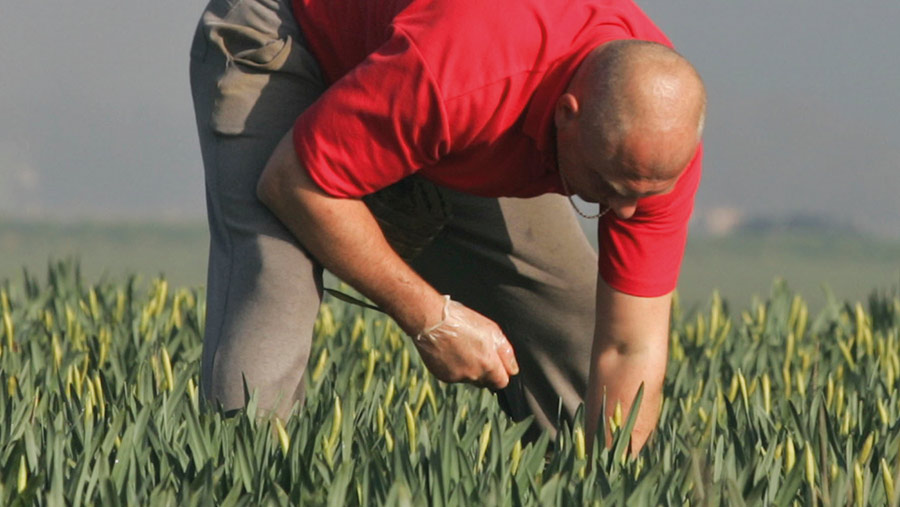 About 20% of migrant workers on farms are yet to apply for for EU Settlement status, a Farmers Weekly poll has found.

With the deadline for the EU Settlement Scheme (EUSS) fast approaching on 30 June, farmers are being reminded to ensure their staff have applied.

If applications haven’t been lodged by that date, both employers and their staff may have challenges, warned immigration lawyer Sacha Wooldridge of Birketts.

Employers are currently not legally obliged to check if existing workers have applied to the EUSS, but Ms Wooldridge advised them to do so urgently or their staff could be ineligible to continue working in the UK beyond the end of June.

“There is a strict deadline of 30 June to register an application; we have yet to see detailed guidance about an extension for late applications,’’ said Ms Wooldridge.

She described the application process as straightforward, taking on average 15-20 minutes to complete online or via an app – the app works in the EU so workers currently away from the UK can apply if eligible.

The number of applications has surged as the deadline approaches, so some are taking more than 12 weeks to be processed, but workers who have applied have the right to continue working in the UK.

“The critical thing is that the application has been made, there is no need for concern if it hasn’t been processed before 30 June,’’ said Ms Wooldridge.

From 1 July, employers will be in breach of the Immigration Act 2016 if they employ someone who they believe doesn’t have the legal right to work in the UK and will face an unlimited fine and up to five years in prison.

Their workers may also lose the right to access the NHS and education and may be turned away at Border Control.

David Camp from the Association of Labour Providers (ALP) is reporting cases of workers already being refused entry at the border because they have not established EU Settlement status.

“Even individuals with documentation and reference numbers are being challenged, but there is now new guidance to border officials to take a more flexible approach to their entry,’’ said Ms Wooldridge.

“Making sure that workers have a print-out of their certificate or [a copy] on their phone will help that process.’’

There is no requirement for workers from Ireland to apply to the EUSS, she said.

After 1 July, farmers will have two options for recruiting overseas workers:

A business must register with the Home Office for the right to recruit migrant workers through the Skilled Worker visa sponsorship scheme, Ms Wooldridge advised.

“Opportunities for sponsorship exists in roles across agriculture and horticulture but it might be difficult to fill lower-skill roles with visa candidates,’’ she said.

Applicants need a job offer from an organisation willing to employ them before they can apply and these roles must meet minimum salary thresholds – for workers under 26, it is £20,480, rising to £25,600 for more experienced roles.

However, the costs may be prohibitive, she added. Under the scheme, a three-year visa will cost £5,681, rising to £9,530 for five years. Applicants must also satisfy an English language test.

“The test is quite challenging,’’ said Nick Allen, chief executive of the British Meat Processors Association (BMPA). “We have had people who have been in the country for two or three years and whom we consider to be eloquent and they have failed.’’

But some parts of the recruitment process have become easier – there is no longer an obligation to first advertise the job to the local labour force before recruiting from overseas.

The industry is pressing the government to include poultry and ornamentals in the Seasonal Workers pilot.

This allows farmers to bring in 30,000 seasonal workers from overseas in 2021 to work in the edible horticulture sector.

NFU vice-president Tom Bradshaw said the industry is urging the government to make the pilot permanent.

What can employers do?

“Hopefully we will use all the 30,000 visas available this year because if we don’t it could be used against us to reduce numbers in future years.’’

As the pool of agricultural workers protected by the EUSS gradually diminishes, filling these gaps from overseas will become tougher and more expensive owing to the new rules, the panellists predicted.

This, coupled with a significant outflow of migrant workers as a result of Brexit and the pandemic, will put pressure on farmers and processors who need to recruit.

“Over the past decade, we would have had workers coming over from different European countries and that pool of workers was always being topped up, but because of the new immigration policy, that pool is no longer being topped up,’’ said Mr Bradshaw.

“So you could say that we are at peak availability of the European workforce because at the end of June they will no longer be able to register, and no more are able to move over here with the freedom of movement they had in the past.’’

Only 8% of members of the ALP believe there will be sufficient UK and EUSS workers to meet the food supply chain’s needs and the BMPA is reporting a labour shortage of 10%.

Abattoirs are highly reliant on EU workers, many of whom have gone home even though they have applied to the EUSS.

Mr Allen said the labour shortage had implications for livestock prices as abattoirs would struggle for capacity.

Recruiting from the UK labour pool

Farmers are also facing fierce competition from other industries that rely heavily on EU workers.

“In our own business, we have identified that UK staff are less attracted to our industry and quite a bit of that is down to us.

“We have not sold ourselves particularly well and that is something we need to address,’’ he suggested.

“We should not be expecting people to work in excess of 40 hours. In the past, we have had people on the farm working 60 hours a week, but we are now sharing those roles between two people so that the hours are sensible.’’

Accommodation suitable for workers and their families is important, too.

When he first recruited from overseas 20 years ago, Mr King’s workers lived in mobile homes. Now, their accommodation is converted barns on the farm.

“We can’t see how we are going to fill the gap from the UK labour pool,’’ he said.

“To deal with the situation we are rationalising some of the lines, but this is not great news for an industry that relies on innovation.’’

The BMPA is urging the government to review its decision to exclude butchers from the Shortage Occupation List (SOL), although it could be 2023 before this is changed.

“If they don’t include butchers, we are going to run into serious difficulties,’’ Mr Allen predicted.

Mr Bradshaw urged farmers to build an “evidence base” so they could document issues to build a case to show the government.

This should involve trying to recruit through job centres and working with the Department for Work and Pensions, he said.

“If we advertise the roles and there are not the applicants coming forward then it really does build the evidence base, so that when we go to the Home Office in the future to look for changes to the immigration policy, we have got some factual evidence from their own officers to base those asks upon.’’

He hoped the industry would see some reprieve in the next few months as the complexities of Covid and furlough, which he said had added to the problem, wear off.

He added: “Unemployment is still running at less than 5% because of furlough. It means people are not looking for work.”

If you missed the live debate, you can now watch the recording on FWi.

Birketts is proud to work with Farmers Weekly to support the British farming, agriculture and horticultural sectors and to help raise awareness within the industry of the key actions farmers need to take now to protect the immigration status of their workers.

For help navigating and registering under the EU Settlement Scheme, advice on UK visas/immigration strategy for recruiting migrant workers in future and to keep up to date with the latest news and developments, visit the Birketts website