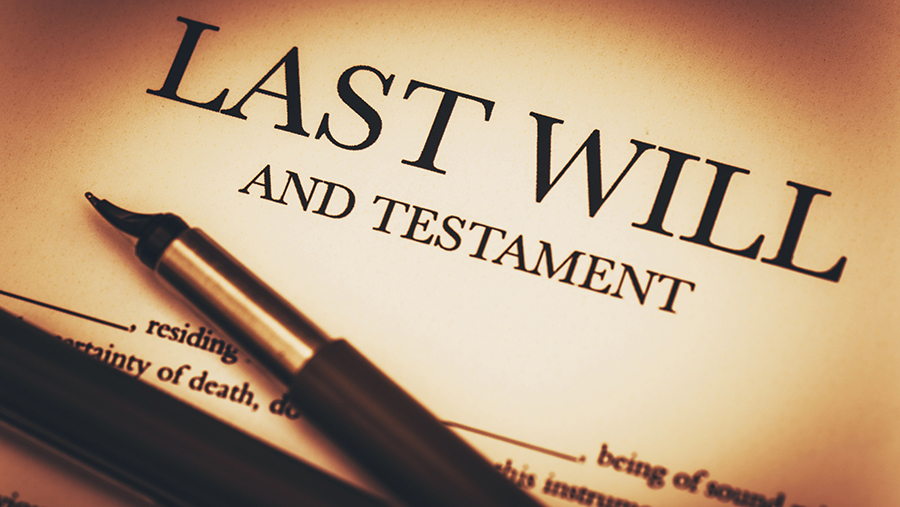 Farmers who have not created a will are being reminded that failing to plan adequately can cause lasting damage to their families and their estate.

In the event that a farmer dies without setting out who inherits their land or business, the rules of intestacy take over, says John Rouse, partner at law firm Lodders.

This sets out a strict framework for how assets are divided, which has the potential to increase the tax burden or break up a farming business, rather than enabling it to be passed to successors.

Despite most solicitors now working from home, anyone looking to put together a will quickly is still able to, says Mr Rouse. Advice can be given over the phone and documents can often be exchanged by email.

What to assemble before meeting a solicitor to discuss a will

To accelerate the process of drawing up a will, it helps to have the following to hand before meeting:

Farm business owners should also be mindful of other crucial documents when thinking about succession planning, says Mr Rouse.

For many husband-and-wife teams, a written partnership agreement that gives a surviving partner the right to access joint banks accounts can help prevent banks freezing access to assets until probate is granted, allowing a business to continue to function.

For many farmers, handing over assets in a way that preserves the safety of the business will be high up the priority list, says Stuart Thorne, a partner with national law firm Clarke Willmott.

Several options can allow this to happen, including using life interests.

This allows assets, including land or a business, to pass to one person for control during their lifetime, but the will can then stipulate it passes to someone else on their death.

This is commonly used when a benefactor fears that a spouse remarrying will threaten land or a business eventually being inherited by children.

An alternative is requiring assets to be placed into a discretionary trust, which can be useful when a farmer is not sure who he wants to pass things on to, says Mr Thorne.

It should be accompanied by a letter of intent setting out the benefactor’s wishes on what the generated wealth should be used for and when assets can be released from the trust.

Nominated trustees can then act on those wishes and have more leeway to adapt to circumstances that could not have been foreseen.

The differing ways in which assets are handed on can have significant implications for how much tax will have to be paid, but there are a variety of methods to make it as tax efficient as possible, he says.