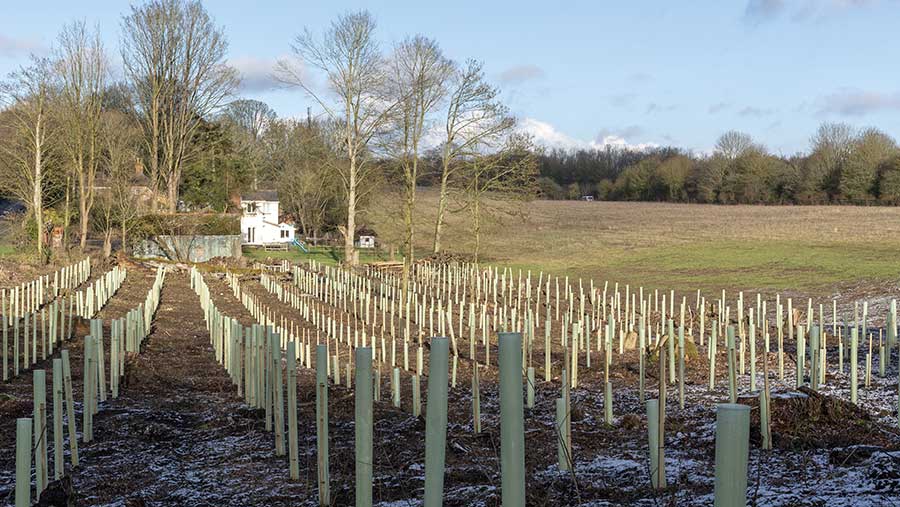 In Farmers Weekly’s third survey in association with the Woodland Trust, trees and tree planting gained a higher profile. Suzie Horne reports on the results

Respondents were asked to name their three main concerns on their farms, and after financial viability came livestock welfare and performance, followed by soil quality and erosion.

Trees were one of the three most significant concerns for 11% of those surveyed, with a quarter of these highlighting the issue because they need or want to plant more trees.

This is in contrast to the previous survey in 2018, when maintenance and management of trees and woodland was seen as the main concern regarding trees.

The need for shelter was another important reason for trees being a main concern, while for others it was the challenges of maintaining and managing woodland, alongside diseases such as ash dieback.

However, the proportion of respondents who had planted woodland in the past 10 years fell to 16%, compared with 24% in the 2018 results.

Similarly, the proportion who had planted single trees in the past 10 years was 20% this year compared with 35% in 2018.

Nineteen percent had planted field corners in the past 10 years and 29% had planted hedges, both of these being similar figures to those in the 2018 results.

Planting trees was generally viewed very positively, with the most popular reasons given being to encourage wildlife and increase diversity, provide shelter and reduce noise.

The other main reasons were:

Top benefits of trees to farmland

Reasons why respondents either currently have trees on their land or which would encourage them to plant trees:

Where trees had been removed, it was most often because they were dead, dying, diseased, in a dangerous condition, or a combination of these.

While the wildlife, heritage, shelter and fuel advantages were seen as the most important reasons for already having trees on farms, when asked what could potentially encourage people to plant trees in future, the most likely incentive (cited by 78%) was improved income potential through schemes such as ELM or other planting grants.

Other strong encouragements included using trees to trap pollutants before they reach watercourses, to capture ammonia emissions from livestock, and the potential of trees to improve productivity.

Weather extremes provide challenges not only for a productive and stable agriculture but also for the landscape in general.

Highlighting that climate threat, 77% of those surveyed had experienced more frequent and intense rainfall in the past five years, while 71% had also experienced drought in that timescale, with wind, storms and warmer winters also common experiences.

They saw flooding and wetter weather, alongside incidences of hot and warmer weather, bringing productivity challenges and making it difficult to plan.

“I grow Christmas trees commercially and the lack of rain in the spring of last three years has caused some serious issues.” 200-499ha, South East

“We feel we have lost any control over our business and constantly worry about our ability to successfully farm. Our biggest threat is the unpredictability of the weather, and this causes massive stress and worry.” 200-499ha, Midlands

“More unpredictable. Could be hot or some wash-out every year now, so better soil and better general environment will be key to running a strong vibrant farm.” Above 500ha, Midlands

“It will have an effect, but will only affect us adversely if we fail to adapt to the changing circumstances.” Above 500ha, Yorkshire & Humberside

“It will reduce grass growth in the summer but I think it will prolong my grazing season as winters are getting warmer.” 20-99ha, Midlands

“I’m hoping that it will encourage us to partner with people/companies in order to add more trees in order to sequester more carbon dioxide and reduce our carbon footprint even further.” 200-499ha, East Anglia

Incentives are there now to plant trees

While the results are broadly similar to those of previous surveys in 2016 and 2108, farmers are increasingly aware of the potential of trees, says Helen Chesshire, lead farming advocate for Woodland Trust.

While the combination of the climate crisis and the massive changes facing farming is challenging,  farming can be part of the solution, with trees integrated into farming systems, she says. 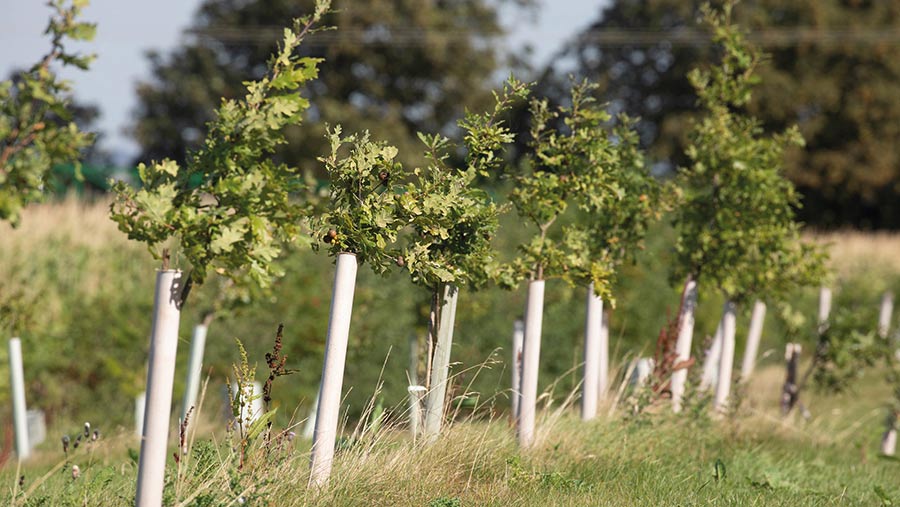 “If you do it well, there is no trade off. Trees will enhance food production. Growing two crops from the same land, such as rows of fruit trees in arable crops, can increase total productivity in some cases by as much as 40%.

“Food production will also benefit from the services agroforestry supports such as increased habitat for pollinators and shelter for livestock.

While many are waiting for more detail on the new support policies and putting decisions on hold, farmers should take up existing schemes, advises Ms Chesshire.

The Woodland Trust is about to start a 30-month Defra trial to test the mechanics of how farming can be supported in ELM through agroforestry.

This is being run in partnership with the Organic Research Centre, the Soil Association and Abacus Agriculture.

The trust is looking for volunteer farmers and landowners to join the trial which will be based on six regional hubs to reflect different farming systems, farm types and types of agroforestry.

To take part or find out more, contact helenchesshire@woodlandtrust.org.uk

“They need to be thinking and planning and planting trees now,” she says. “Defra and the devolved administrations need to give written assurances that no-one will be penalised under new support schemes such as ELM for entering other schemes in the run up to the full launch of those new schemes.

“In selecting the need or desire to plant more trees as their main concern regarding trees, farmers and landowners completing the survey show the positive way in which trees on farmland are viewed  and that the appetite is there to plant many more.

“Anecdotally we are experiencing a growing demand for our Trees for your Farm scheme including planting trees for shelter to aid livestock productivity.”

The survey was carried out between late June and late July, and 710 respondents across the UK fully completed the survey.

The survey showed that the concern about financial viability is greater among older farmers and on smaller farms.

Awareness of some tree issues such as ash dieback (79%) was relatively high among respondents, with deer, squirrels, drought, livestock damage and acute oak decline all scoring relatively highly on this measure.

At the Woodland Trust we’re always striving to perfect our tree-planting advice and tailor our offer to support the farming community as best we can. That’s why we’ve teamed up with Farmers Weekly as the sponsor of this year’s Hot Topics research.

Your views on conservation and farming will help shape the ways we work with farmers across the UK.

From improving farm productivity and managing water flow to enhancing soil health and animal welfare, we know that planting trees can be a win-win for landowners.

Our woodland outreach  advisers have years of experience in maximising returns from trees planted on farms. Find out how they can help you at woodlandtrust.org.uk/plant.