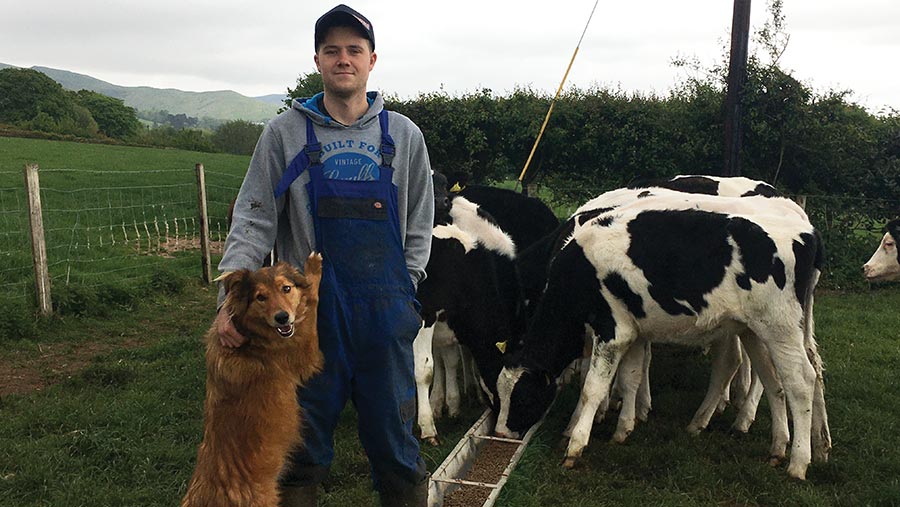 A Welsh county farms tenant has spoken out about his struggles with short-term agreements, a lack of progression opportunities and insurmountable rent values, hoping to raise awareness of the difficulties new entrants face.

Adam Jones, 22, has been renting 25 acres from Denbighshire County Council since May 2017.

The tenancy is due to end in May 2021 and the council wants to let the land to another new entrant, meaning Adam’s farming area will be cut by half and he faces losing his contracts for raising heifers for local dairy farmers.

“The business I have built up will have to come to an end basically because the land is taken from you and there’s no next step on the ladder,” Mr Jones says.

“The council expects you to start renting privately, which is fair enough, but it’s good maize-growing land around here, with people paying about £200/acre, and new entrants can’t compete with that.”

Mr Jones began working on a sheep and beef farm when he was 14 and decided to build up his own flock, renting a five-acre field from his grandparents.

When he successfully applied for the council holding and began rearing dairy heifers, he moved away from sheep, attracted by the guaranteed income from the cattle contracts.

He has managed to privately rent about 25 acres of additional land in patches, and some agricultural buildings on another holding, while continuing to tender for more blocks, but the quality land attracts premium prices.

“The only way for me to be able to carry on my business after the tenancy ends would be to pay more for rent, but then the business becomes less profitable,” he says. “It’s very disheartening to see because one minute the business plan works and then the next it gets thrown out.”

Mr Jones, who would be willing to move if an opportunity arose for a unit of 100 acres-plus, says he has asked the council for help but has been left in limbo because the authority has no progression units for him to move on to.

“I have chosen to go into farming so I know the pitfalls, but the people who are supposed to be there to help and support young people end up giving you something with one hand and taking it away with the other,” he says.

“It’s very difficult because there doesn’t seem to be a system in place and no next step for us.”

Denbighshire County Council owns about 2,203 acres, divided across 18 farms and areas of bare land. In March 2015 it adopted a strategy that proposed a managed disposal of its estate, with sitting tenants occupying holdings under long-term tenancies being given the opportunity to buy all or part of those farms.

Another element of the Agricultural Estates Strategy was the creation of a new entrant scheme. This involved a small block of land being let to one tenant for a four-year term, with the intention of repeating the process with another new entrant at the term’s conclusion.

The overall strategy means it is not possible for progression units to be made available to these new entrants, according to the council.

A council spokesman said: “It is made clear as part of the application process that the purpose of the letting was to assist a new entrant in their endeavours to start farming and to provide them with experience of going through the application process for a new tenancy, the idea being that when the tenancy would come to an end, the land would be advertised again to provide that experience to someone else.”

County councils should both offer opportunities to new entrants and work to sustain existing tenants in their farming careers in the long term, be that on the local authority’s estate or in the private sector, says George Dunn, chief executive of the Tenant Farmers Association.

“With the capital requirements of agriculture, it is one of the most difficult industries to enter,” he says.

“It is not sufficient to merely oversee a conveyor belt approach where new entrants come on at one end and fall off at the other if they cannot make the transition to the private sector.

“The council either needs to put resources into helping its tenants into the private sector or look at extending existing tenancies and providing long-term tenancies for the security and investment of those granted initial opportunities.”