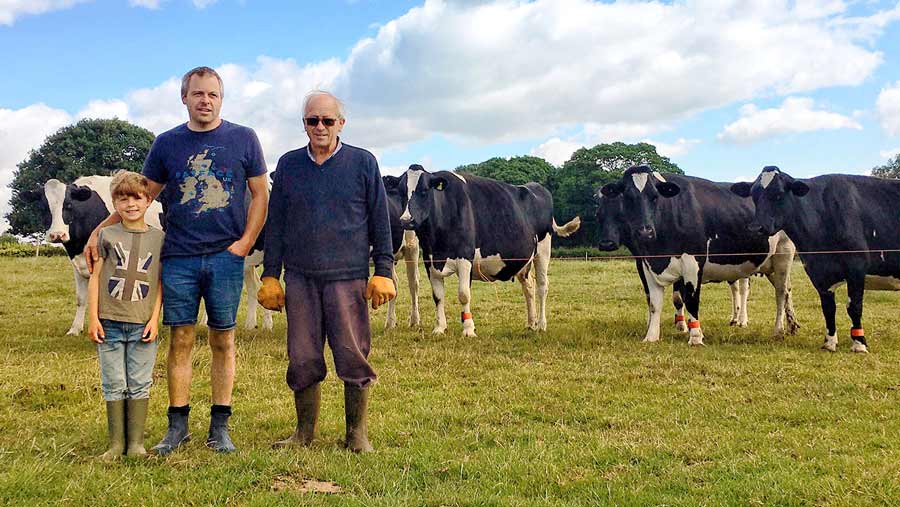 A farming family is seeking support from the public to prevent an active dairy farm from being turned into a large-scale housing estate.

Developer Westridge Village has submitted plans to the council to build 475 homes on agricultural land in Ryde on the Isle of Wight.

The land is home to Westridge Farm, the last remaining dairy farm in Ryde – and one of only 10 dairy farms left on the island.

The Holliday family have been tenant farmers at the farm for more than 50 years and the prime agricultural land and its precious ancient wildlife habitat have been valued and maintained for more than 700 years.

Private landowner Robert Ball (Arnbrow Ltd) owns the land and lets it out to the Hollidays in a continual tenancy agreement under the Agricultural Holdings Act.

Third-generation tenants Nigel and Amy Holliday farm 75 Holstein-Friesian cows and followers and 35 chickens at the farm. They have been working tirelessly to produce milk to feed the nation during the coronavirus pandemic.

But after providing such a valuable resource through these unprecedented times, they are faced with the potential loss of their home and livelihood.

“I was brought up here, so I know this landscape, I can see it with my eyes shut and to see it all go, under concrete, breaks my heart,” said 46-year-old tenant farmer Nigel Holliday.

Known as West Acre Park, the planning application by Westridge Village (IOW), owned by the bosses of Captiva Homes, was submitted to the Isle of Wight Council in July.

The application proposes the demolition of agricultural barns, with plans to build a further 475 homes and a GP surgery, café and office space, mostly on greenfield land at Westridge Farm in Elmfield. Captiva says 166 of the homes will be “social or affordable”.

The Holliday family have already lost 4.45ha of grazing land after Captiva had a previous planning application approved in May 2017 to build 86 homes, which they are now constructing and selling.

“We invested in the farm and got a robot milking unit in place as we were under the impression there wouldn’t be any further development,” said Mr Holliday.

“If the current application goes through, we will be left with about 50 acres, no buildings and no house.

“It would be over for us. Without any buildings, it’s difficult for us to have any stock.”

The Hollidays have two children, Archie, eight, and Poppy, 11. They have posted a video of Archie on Facebook explaining how he wants to become a farmer in the future.

Mrs Holliday said: “A lot of these tenancies get handed down to the children. But as things stand, we would leave with nothing.

“We are letting the people on the Isle of Wight know. We need them to get behind this and raise objections if they feel strongly about it. We must save Westridge Farm for future generations.”

The Environment Agency; mayor of Ryde Michael Lilley; Isle of Wight Conservative MP Bob Seely; and councillors on the Nettlestone and Seaview Parish Council have raised objections to the development.

Concerns have been raised about its impact on ecology and wildlife, the infrastructure and roads.

The NFU and Campaign to Protect Rural England (CPRE) have also pledged to submit objections.