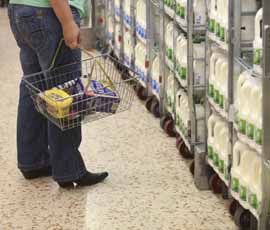 The call followed a meeting of with farm minister Jim Paice at the Dairy Supply Chain Forum in London on Thursday (10 May).

Cuts in farmgate milk prices mean DEFRA’s proposed code of practice for the dairy sector is needed more than ever, industry leaders believe.

NFU Scotland said a code offered an opportunity to address the significant imbalances that exist in the dairy supply chain by insisting on more meaningful, balanced contracts.

If milk buyers fail to come forward with positive proposals, the NFUS would be looking for politicians to legislate in this area, said NFU Scotland Vice President Allan Bowie.

“Without more balanced contractual arrangements between dairy farmers and their milk buyers, many processors will continue to take the easy route to managing their own margins by simply lowering the price they pay to farmers rather than looking to their customers.

“It would be far more positive for our dairy sector if our milk buyers were to react to changing markets by looking for alternative customers or developing alternative products.

“However, rather than having a long-term vision, too many processors revert to the old habit of seeking short-term gain by cutting the price paid for milk.

Mr Bowie said a code of practice should include substantial contractual improvements that brought better balance and fairness to arrangements between farmers and their milk buyers.

“Where processors drop the price of milk without proper negotiation, justification or agreement – as has happened in recent days – then suppliers should have the option to resign under a shorter notice period.

“If this is not acceptable to processors, then we have urged our politicians to legislate.”
NFU dairy board chairman Mansel Raymond offered a similar view.

“There are two options for the future of dairy contracts; legislation with determinable prices based on a fixed or formulaic price, or a voluntary code of practice to bring fairness to contracts.”

Dairy processors that wished to retain discretion to set milk prices must include break clauses allowing farmers to leave contracts early  in the event of a price cut, said Mr Raymond.

He added: “We are adamant that no farmer should be forced to stay in a contract when the deal is fundamentally changed.”

While farmers were tied to long notice periods, there was no incentive for a milk processor to offer a market leading price, Mr Raymond said.

“Only when we see break clauses to contracts will processors have the ability or motivation to compete on price for farmers supply.”