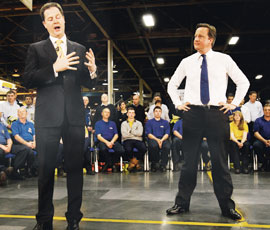 The Prime Minister David Cameron has backed British farming and stressed the industry’s importance in bolstering the UK economy.

Mr Cameron said: “If we want a healthy farming industry, what we’ve got to recognise is that it really depends on us as consumers going into shops and supermarkets wanting to buy quality British products.”

He made the remarks in an interview with the Daily Telegraph newspaper at the factory.

“Of course we’ve got the Common Agricultural Policy, and of course there are the schemes and grants to help farming,” Mr Cameron said.

“But in the end, if you want healthy farming, you want consumers saying British meat is the best, British food is the best, I want to demand the best and I want to go out to buy the best. That would be good for British agriculture.”

The coalition leaders were told that one tractor rolls off the production line every four minutes at the Basildon facility.

Since its establishment, the plant has produced more than 1.8 million tractors.

The site spans 40 hectares and employs around 1,000 people. Seen as an agri-manufacturing success story worth £1.2bn annually to the economy, over 90% of all tractors produced are exported.