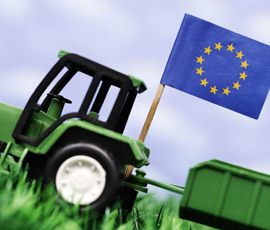 Failure to reach an agreement on the CAP reform package next week would leave farmers feeling insecure and unable to plan for the future, according to the European Commission’s agriculture spokesman.

Roger Waite, spokesman for the commission’s Agriculture and Rural Development Directorate, said an agreement next week under the Irish presidency of the EU would be better for everyone.

However, if a deal cannot be struck now, doubts would persist and the whole process would become a lot less efficient, he warned.

“For farmers, if we postpone this decision, it’s more difficult for their security. They can’t plan ahead for the future. And it’s clear that it’s better for everyone.”

He added: “From a formal point of view, what we will have next week, we hope, is a political agreement. Of course that must be adopted by parliament in plenary, but also by the council.

“Formally, this will be an agreement on first reading. If there are some outstanding problems, it’s still possible that it would come back as a second reading. But that’s for the long-term.”

If there is no agreement next week, negotiations would not be dead, he insisted, but that would “make things more difficult and less efficient”.

“For farmers, if we postpone this decision, it’s more difficult for their security. They can’t plan ahead for the future.”
Roger Waite, European Commission’s agriculture spokesman

Mr Waite said doubts would remain over whether all the regulations could come into force from the start of next January under Lithuania’s leadership following the country’s succession to the EU presidency from next month.

During the briefing, Mr Waite gave a refresher of some of the measures that will be included in the new CAP deal, including those which still need to be agreed.

Mr Waite said a lot of discussions had also been going on this week on “greening equivalency” – taking into account what farmers already do on farm in terms of biodiversity.

“Some agri-environmental schemes from rural development cover similar areas. We have to make sure that farmers are not being paid twice through greening and through an agri-environment scheme doing the same thing,” he added.

“These are issues that need to be clarified. There have been a lot of meetings this week which have taken these things much closer to an agreement.

“In broad terms, the idea of greening is broadly accepted – it’s just a question of how we do it.”

For market measures, moves to increase market orientation will definitely include an end to the sugar quota regime – the remaining questions were about when and under what conditions.

“We’re looking to end sugar quotas. In the course of the reform, this basic idea seems to have been accepted.

“We say they should end in 2015, the council say 2017 and the parliament say 2020. This will be part of the negotiation, but it’s clear that the quota system will end.”

Other issues that remain to be clarified include:

The European Parliament, Council and Commission is due to meet in Luxembourg on Monday (24 June) for crucial “trialogue” talks on the new CAP deal.

If the talks are successful, a final political agreement could be agreed in Brussels on Wednesday (26 June).