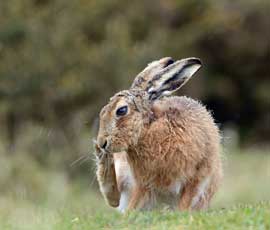 Wildlife and conservation groups have branded the CAP reform deal a “disastrous” and “backward step”.

A political deal on CAP reform was agreed on Wednesday (26 June). A key driver in the reforms was greening – new environmental requirements attached to direct payments.

But the RSPB said these measures had been drastically watered down by agriculture ministers, and MEPs on the agriculture committee.

The society’s CAP expert Jenna Hegarty said she believed the deal meant much of the CAP’s annual €50bn budget would fail to support wildlife and the environment.

“Greening had real potential to secure much-needed space for nature across Europe’s farmland, but the final deal has been emptied of real environmental value,” said Ms Hegarty.

The RSPB is particularly concerned about the shortage of funding available for farmers in so-called high-nature-value farming areas. These farmers, often working in some of the most iconic landscapes in the UK, help to preserve threatened species and the landscapes they depend upon.

Martin Harper, the RSPB’s conservation director, said: “The deal struck in Brussels is likely to be disastrous for wildlife and the environment, and it is a poor use of precious public funding. The final deal has let down many of Europe’s most progressive farmers who have been working hard to make space for nature and the environment while producing food.

“We are now appealing to Owen Paterson and his counterparts in the other UK countries to use their full powers to reward those who are willing to deliver the most for wildlife and the environment. It will be down to him and his colleagues in the devolved countries to follow through on this.” Mr Harper said.

The National Trust also voiced its concern. Trust rural enterprise director Patrick Begg said: “There was so much to be won by being bold about the long-term future of agriculture in Europe, yet the final settlement feels like a backward step.

“The deal makes it harder, not easier, to reward farmers and land managers for the provision of fundamental public goods. Our ability to lay the foundations for a sustainable farming industry – healthy productive soils, clean water, cultural landscapes and public access – has been seriously undermined.”

Mr Begg added: “There’s less money to go around as a result of the reforms and a risk that the message to land managers is ‘carry on farming as before’. Our government needs to show real leadership in Europe and send a clear signal that environmental sustainability has to be put at the heart of farming in the UK.

“It’s critical that Owen Paterson uses his discretion to shift as much resource as possible from Pillar 1 to Pillar 2. He needs to back new agri-environment schemes, open to as many farmers as possible, that set a high bar for quality farming and are based on safeguarding and improving our precious soils, water resources, landscapes and wildlife.”

CAP reform deal done but not quite dusted