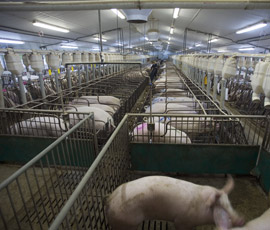 A survey of buildings used for pig production has found many are more than 20 years old – but pig farmers can’t afford to invest in replacements.

Pig farmers surveyed said they wanted to invest in new buildings to promote a better environment that would lead to production efficiencies.

However, producers said the financial climate was not right and therefore they were reluctant to invest.

The survey, published by BPEX, which represents pig levy payers in England, showed 90% of farmers stated that their facilities were not ideal and they wanted to invest in new buildings.

Also, many producers said they had not invested in new building facilities for a long time, or made any substantive replacement or extension to their housing in the past 10 years.

Improvement in physical performance, hence reducing the cost of production, was cited as the main reason for considering investment in both facilities and new technology.

But better use of labour and the desire to improve animal welfare also featured strongly, the survey showed.

BPEX environment programme manager Nigel Penlington said the study was the first of its type for many years and it provided a detailed insight into the pig industry.

He added: “What is clear is that, while the structure of many buildings on pig farms may be old, they have been maintained so that they remain fit for purpose. But they may not be the most efficient in terms of resource and labour use.

“The information gathered is helping BPEX respond to customers’ needs and assist them in taking their businesses forward.”

Welfare to feature at Pig and Poultry Live