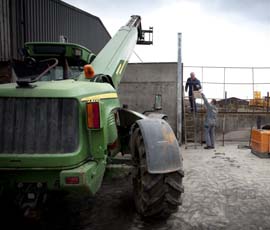 Most contract farming agreements should deliver another profitable year for landowners and contractors this harvest, but cost increases are eating into returns.

The Bidwells contract farming survey of 80 farms managed under such agreements predicted an average return of £376/ha for farmers and £471/ha for contractors in 2012, down just £8 and £12 respectively on last year’s record levels.

Plenty of opportunity to lock into strong prices for the current cereal and oilseed crops had boosted gross output by almost £100/ha on farms, but a £60/ha increase in arable costs – particularly fertiliser and pesticides – meant net profit was forecast down £23/ha to £594/ha in 2012.

Other overheads, such as the cost of drying, storing and hauling grain, plus energy and insurance charges, added another £11/ha to costs, the survey found.

“All this adds to the pressure on farming businesses in terms of the working capital necessary to fund operations,” Bidwells head of farm management, Jonathan Armitage, said.

“While interest rates remain at historical lows, those able to retain profits within the business avoid the significant costs of funding the farming operation through overdrafts or other forms of borrowing.”

The increased capital required to fund operations increased risk involved, but the structure of contract-farming agreements helped the farmer or landowner manage that risk through a fixed prior charge and a share of any profits, he added.

“It remains an extremely effective way of managing risk, while still being able to share in profits in better years.”

There were signs that the structure of many contract farming agreements was changing after an improvement in farm profits over recent years. The 2012 survey found a slight (1%) increase in the farmer’s prior charge and depreciation and a 2% increase in the contractor’s charge and fixed sum.