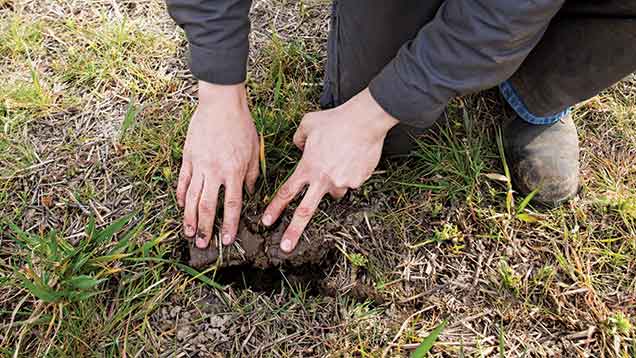 Farmers could be paid for helping to keep carbon in their soils as part of an ambitious carbon-trading scheme.

Companies wishing to offset their greenhouse gas emissions will be able to pay farmers to capture carbon from the atmosphere and lock it back into the earth.

The process, known as carbon sequestration, involves a range of land management techniques, such as no-till, cover crops and the use of non-synthetic fertilisers.

Richard Page, co-founder of AR Carbon, which has established the scheme, has spent the last year working with farmers and landowners across 30 UK sites to trial the model.

He said it would take about two years for enough change in the soil to generate income, but that as a conservative estimate, a farmer could expect to earn £4,000 a year for 50ha, for a minimum of 20 years.

This would not provide a “bonanza” for farmers, he admitted, but could provide an alternative revenue stream.

Three national companies and two multinationals had indicated they would look to buy carbon credits via the scheme, said Mr Page. He said he was very confident the market existed for carbon credits, although AR Carbon could not guarantee buyers or the price of credits.

Carbon spot prices vary widely around the world, but the EU’s Emissions Trading System (ETS) accounts for the majority of the market and acts as the cornerstone of its policy to combat climate change. It is undergoing major change at the moment to remove surplus credits from the market.

AR Carbon’s scheme will be independent of the ETS and attempt to create its own carbon market that farmers can benefit from.

How the scheme will work

Farmers who enter the scheme will have their soils tested to provide a baseline measurement of carbon content and will then be supported to increase this figure, with further tests done annually.

Those who have already been actively doing this however, such as organic farmers, may be able to be paid for the work they have already done in capturing carbon, so long as they have kept verifiable measurements along the way.

Land would not have to be taken out of production, said Mr Page, but just managed differently, with a reduction in costs for synthetic fertilisers and agro-chemicals while increasing beneficial mineral content.

Carbon content could be improved in all types of land and this could continue for between 20 and 30 years in carefully stewarded land, he said.

To join, farmers would pay an annual membership fee of £150 plus the cost of their soil tests (£15.99). Up to 50ha could be entered by one farmer, but Mr Page said farmers who wanted to test out the scheme on a small area could enter as little as 1ha.

Advice and support will be available via web resources, but once more members have signed up the company is planning to group them and offer roadshows, workshops and facilitate member knowledge sharing.

The scheme is open and part-funded by the government’s Department for Business Innovation and Skills.