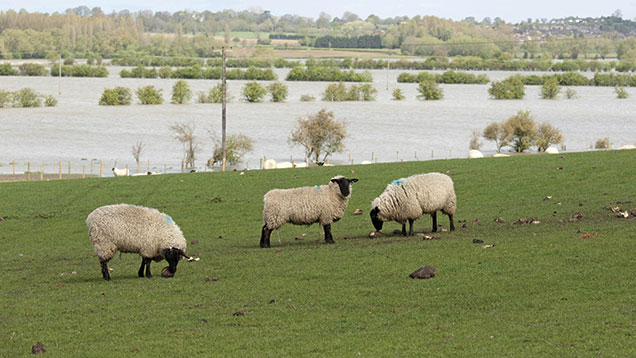 For Farmers Weekly’s third instalment in the Rise to the Climate Challenge series, we examine the financial effects of different weather scenarios on a mixed farming enterprise

Having all your eggs in one basket is likely to raise business risk as the weather becomes more volatile.

A mixed farming system can help mitigate these practical and financial effects by spreading the risk between enterprises. Planning ahead and factoring in unpredictable and extreme weather will also help guard against the shocks and stresses a businesses could experience.

See also: Catch up on the other parts of the series, which look at the financial costs of different weather scenarios on an arable farm and a dairy farm.

From now on this should be easier. A new model developed by the Andersons Centre, Farming Advice Service, Adas and the Environment Agency, has for the first time modelled the financial implications of different weather on farming businesses.

Using this as a template when creating a farm budget could help integrate the risks and opportunities from the weather into business thinking.

The holding used in this model, “Meadow Farm”, is a 154ha lowland beef, sheep and arable farm, with 40ha on a fixed business tenancy, one farmer-owner, a further full-time family worker and casual labourers.

The most difficult year for the mixed farm is a wet year, with 25% more rain throughout the year. This brings increased lamb mortality rates, vet costs and a 24% jump in bought-in feed costs due to a longer housing period and difficult finishing.

The biggest financial effect is felt through the arable side of the business, which sees feed wheat and barley yields down 30%, with a knock-on effect of a 34% increase in straw costs.

As a result, crop area gross margin experiences a drop of £251/ha and the longer finishing period and increased costs reduce the livestock gross margin by £33/ha.

In such a wet year, the total business surplus drops to the lowest of all the scenarios, with a loss of £10,164 for the year.

George Cook, senior farm business consultant at the Andersons Centre, says a mixed farm can help spread the costs, but managing the cost base can be difficult due to a lack of economies of scale.

To cope with increased extreme weather, farmers are likely to need to do more mixed cropping, particularly mix spring and winter cropping.

A key vulnerability for mixed farms is the quantity and quality of forage, which fluctuates a lot with the weather.

“People will need to get a buffer stock of forage to carry them forwards and to stop hoping for spring to come early, because it might not.”

Scenario 2: High spring and summer temperatures, with low rainfall for a sustained period

Scenario 3: Higher than average rainfall, with 25% more throughout the year