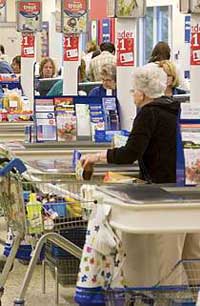 Food prices will more than quadruple in real terms within 20 years unless urgent action is taken to combat climate change, an expert has warned.

The cost of bread will spiral as wheat yields fall, said Ray Hammond, a leading expert in forecasting social and economic trends and visiting lecturer at Oxford University’s Institute for the Future of Humanity.

Future prices of consumer foodstuffs, published by Friends of the Earth, were modelled using previous price hikes recorded by the World Bank and projections by the International Food Policy Research Institute.

“Global food production is already precarious – and climate change threatens to tip it into disaster,” said Mr Hammond. “This is what the future looks like in Britain if we don’t prevent dangerous climate change.”

Climate change would put extra stress on land and resources around the world, exacerbating the existing food crisis. Yields of staple crops like wheat would fall and patterns of trade and consumption would be affected.

Mike Childs, Friends of the Earth head of climate, said: “Life with climate change won’t be pretty, it’ll be pricey – the cost of simple foods like bread and rice will rocket and millions more people will go hungry here in the UK alone.”

The figures were released 40 days before world leaders meet at UN climate talks in Copenhagen. Rich countries should slash greenhouse gas emissions by at least 40% by 2020 to help safeguard the future of the planet, said Mr Childs.

“The root causes of the food crisis must also be tackled. We need urgent political action to create fair global food supplies and make farming planet- friendly – from field to fork our food currently creates up to half of all greenhouse gas emissions.”