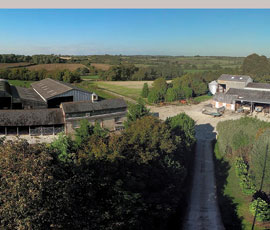 Cowick Farm is a late test for the 2011 arable market, with almost 190ha (469 acres) of mainly grade 3 land between Hilmarton and Calne in Wiltshire.

It is essentially what many buyers are after a decent-sized block of commercial combinable crop land without a high proportion of residential value.

Accommodation is in The Clocktower Cottage, a roomy, renovated two-bedroom cottage with an attached cartshed with scope to convert, subject to planning consent.

Cowick’s current owner is retaining the main house nearby and a small parcel of land.

There is more than 20,000sq ft of farm buildings including grain storage for about 800t and a decent general purpose covered yard, with the remainder a mix of modern and traditional buildings, said Harry St John of Smiths Gore.

“This farm has got what it takes. It’s a good commercial unit and could suit a wide variety of purchasers; investors wanting a tax shelter farming operation where all the assets should qualify for APR or BPR or farmers merely wanting to expand their acreage without having to commit too much of the price on bricks and mortar,” he said.

The £4.1m-plus guide price puts the farm at at least £8,750/acre, which buyers have been paying for bare land in the area, points out Mr St John.

About 380 acres is arable, currently all down to combinable crops, with about 57 acres of valley meadows along the northern boundary. There is also a small block of ancient woodland and 22 acres of younger plantations.

Smiths Gore marketed two Wiltshire farms earlier this year – Manor Farm at West Overton, now sold, and Manor Farm, Chirton near Pewsey, which was a similar acreage to Cowick Farm and on which exchange is imminent. (Smiths Gore 01865 733 300)