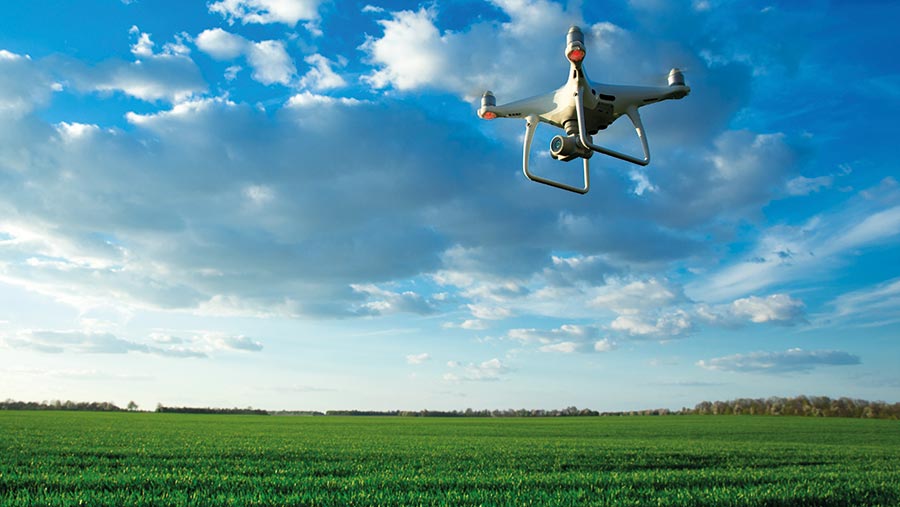 Drones have become an increasingly common sight over farmland in recent years, with many farmers using their own equipment to do anything from taking aerial pictures and videos to detailed crop health monitoring and herding livestock.

But after the chaos that affected Gatwick Airport in 2019 and other incidents involving drones and the public, the Civil Aviation Authority (CAA), the regulator responsible for drones, is keen to clamp down on irresponsible operators.

It has therefore introduced new risk-based rules to ensure drones are flown safely. Failing to do so could result in a hefty fine or even prison.

See also: Two arable farmers explain how they use drones

Gone is the distinction between hobbyist and commercial drone flying, and instead there is now a somewhat complex 238-page framework of rules based on the risk the flight poses to other “uninvolved” people and the size/capabilities of the drone being flown.

While many flights over open farmland away from people may be relatively low risk, all drone operators must stick to the latest rules and follow the Drone Code.

A key part of the new rules is the requirement for nearly all drone owners and operators to register for the correct paperwork before making any flight.

The legal owner of the drone must now formally register with the CAA for an Operator ID.

This is available only to people aged over 18 and must be renewed annually, costing £9.

Any drones you own should then be clearly labelled with that ID.

The operator is also responsible for ensuring that whoever flies the drone (themselves or another person) has a valid Flyer ID.

This is obtained by completing the CAA’s online drone pilot theory test. The multiple-choice test is free and valid for five years, with a minimum age of 12.

The Flyer ID allows that person to do basic low-risk flights within the CAA’s Open category.

Most hobbyist, and some commercial drones, used in open countryside will fall into this low-risk category.

There are some basic rules that operators must follow and restrictions on the type of drones that can be used in particular situations within the Open category, which is divided into three sub-sections depending on whether the drone will be:

The Flyer ID allows people to operate a drone in the Open A1 and A3 sub-categories, subject to the drone meeting certain criteria.

Only very small (less than 250g) toy drones can be flown over people as they are so light they pose minimal risk should they come down unexpectedly.

Flights of all other drones weighing more than 250g, and flights close to people (as covered by the A1 and A2 sub-categories) are tightly restricted, and require pilots to complete extra training (a Certificate of Competency).

Most farmers operating drones in open countryside are likely to fall into the Open A3 category, which states that drones can only be flown in “areas completely clear of uninvolved persons and may not be flown within 150m horizontally of areas that are used for residential, commercial, industrial or recreational purposes”.

Only small toy drones weighing less than 250g without a camera are exempt from the ID registration requirement, although users must still follow the Drone Code.

The CAA rules have been built around a new European certification system for classifying drones based on technical specifications such as weight, speed and safety features.

While this is still being rolled out, from 1 January 2023, any new drone must be labelled with one of five class marks, ranging from C0 (toy drones up to 250g) to C4 (up to 25kg including payload).

These certification marks determine where and how they can be flown under the new framework.

A two-year “legacy drone transition period” is running until 31 December 2022, allowing existing “unclassified” drones without a class mark to be sold and used under the new rules.

Owners of these drones should go by the drone’s flying weight to determine where and how it can be flown.

Generally, all but the lightest toy drones will be restricted to flying only in open areas well away from people, unless the operator has completed additional training.

Example of how the rules work in practice

Assume a farmer has a DJI Mavic Air 2 drone which they use to take digital photos of their crops to help look for problem areas, blackgrass infestations and other general pictures and videos of machinery in operation on their farm.

As the owner and operator of the drone, they will require both an Operator ID and Flyer ID.

Because the drone does not have a new class mark, it is classed as a “legacy drone”, and as it weighs around 570g, it can only be flown in the Open A3 sub-category.

This does not affect crop scouting flights over open fields, providing they are well away from other people and buildings.

Flying the drone over machines to take pictures or videos should still be allowed, providing subjects are under the operator’s control (such as employees), agree to being photographed/filmed and are not at any risk should the drone crash (for example, they are in a cab).

Likewise, while farm buildings are classed as a commercial/industrial building, if owned and under the control of the farmer, it would be permissible to fly a drone over to inspect roofing or guttering.

If you are in any doubt about where you can and can’t fly, always seek advice first, or attend a drone operator training course.

The “no-fly zone” around airports and airfields, known as the Flight Restriction Zone (FRZ), has been expanded under the new regulations.

The old 1km restriction from the airfield boundary has been replaced by extended restrictions that can reach out 5km from the end of the runway.

The exact size and shape of the FRZ varies for individual sites, so drone users must check they will be operating well outside any restricted area before flying.

Special permission from the airport is required to operate within an FRZ.

Other restrictions apply to dangerous, restricted and prohibited areas, and farmers in remote areas used for low-level flying by military training jets or emergency services must be particularly careful to check that their drone can be used before making a flight.

Insurance is optional for anyone flying a drone weighing less than 20kg for fun, recreation, sport or as a hobby.

However, the Drone Code says third-party liability insurance is required if the drone is being used for “any other reason” – including work on a farm or estate, or if you are getting paid to take pictures.

The CAA’s Drone Code covers flying in the Open A1 and A3 categories. Separate authorisation is needed if you plan to fly outside the rules of this code (for example at different heights, close to residential areas, over groups of people).

Thanks to Dr Richard Green and Jonathan Gill of the National Centre of Precision Farming at Harper Adams University for their help with this article.