A growing number of arable farmers are deploying drones and harnessing the power of aerial mapping to tackle a range of problems in crops.

Oli Hill speaks to two growers who are using an eye in the sky to better target weeds while dramatically lowering their crop protection bills.

Will Atkinson is taking to the skies to target encroaching blackgrass on his mixed farm in the village of Scorton, sandwiched between the Yorkshire Dales and the North York Moors, 10 miles south of Darlington.

See also: How to stay legal when flying drones over arable crops

Mr Atkinson has been working with independent agronomist Patrick Stephenson to develop high-tech aerial mapping of weeds on his own farm and is working towards being able to offer drone services to other growers. 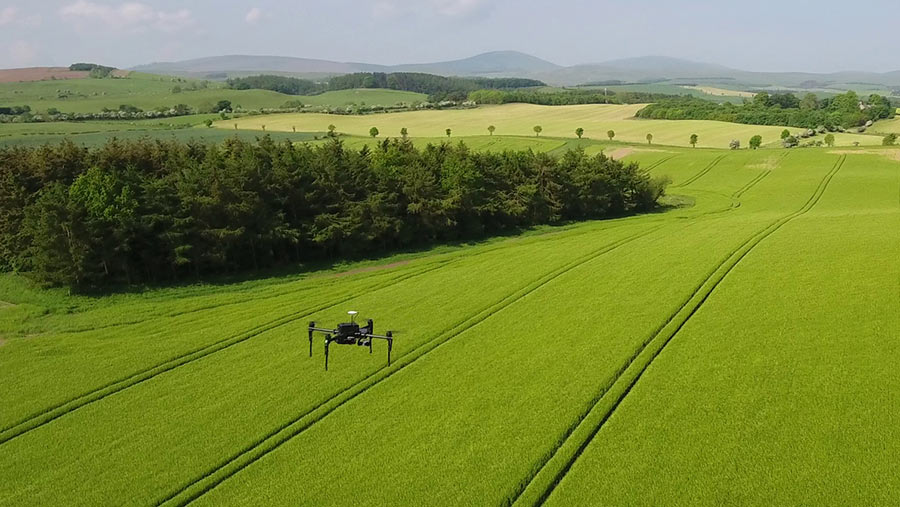 How did you get into using a drone?

We have small quantities of blackgrass on the farm, roughly 10% of our arable area.

Two years ago I was mainly driving up and down fields trying to spot spray blackgrass in small patches to manage infections, but naturally some got oversprayed and some got missed through human error.

So I started to study for a means of taking humans out of the equation and settled on remote sensing.

As satellite imagery is just too big and the pixel resolution doesn’t give a detailed enough view of an area we had to narrow down on the resolution.

We did encounter problems. When I started talking to a few companies in the US, none of them had the licence to export drones to the UK.

In the end I got in touch with a Swiss-based company, who were able to export to the UK.

What are you using a drone for on farm?

When dealing with blackgrass you’ve got to think outside of the box. Before we were mapping fields, our herbicide programme was stacking up to about £100/ha, so we were massively overspending.

See also: 5 factors to consider when buying a drone to map fields

We were spending all this money on herbicides and still only getting about 85% control and you need at least 97% control just to standstill, so we were going backwards.

Now we are using a holistic approach with glyphosate to control blackgrass, while still using herbicides like diflufenican and pendimethalin for control of broad-leaved weeds that generally grow on a field-wide scale.

How do you use the data produced by the drone?

The weed identification and site specific management is really beneficial. For those who have a more widespread blackgrass problem it might be a bit less useful.

A blackgrass plant has its own unique signature, which is the way it reflects the sun’s radiation in different colours, that we humans cannot see.

This gets picked up by the drone and we can then geo-locate the position of target weeds in the field.

We then use these maps for targeted applications in the spring or I increase the area to be sprayed on the map to allow for the spread of blackgrass and use it for a targeted pre-emergence spray.

I must confess, I jumped into it a bit naively and I have still got a lot more learning to do.

I am trying to get to the point where we can use a drone to map a field and be able to feed that into a sprayer with individual nozzle control, making us really precise.

What type of drone are you using?

We bought the drone last Christmas. You can easily spend £40,000 by the time you’ve bought all the software to run it, but you can spend a lot less than that and get something a lot less high tech.

We’re using a fixed winged drone, which weighs about 750g so it’s not very heavy at all and we’ve got different sensors, including RGB (Red, Blue, Green), multispectral and infared.

Has it changed the way you farm?

Naturally we are cautious about the money that we spend on blackgrass. On this farm we sprayed off 20ha of blackgrass this season and we were spending £15/ha on herbicides rather than £100/ha.

The only way of beating blackgrass is by having zero seed return, so you have got to think differently.

Any plans to expand drone use?

The software that I use can also do things like plant counts and generate nitrogen recommendations.

Some things are possible, but I’m just not convinced by the commercial viability of them for farmers.

With monitoring crop disease, I’d say that about 90% of the fungicides that we can use are preventative and then there’s 10% that are curative.

It means that by time you spot early disease with the drone there isn’t much you can do about it, so I’m not sure about the viability and commercial benefit to farmers just yet.

Time will tell where drones will come into the industry. Personally I think they’re here to stay, but working with satellites and tractor mounted sensors, not as a replacement.

I could also see the day when we can recognise the size and health of the weed, so creating a desired application based on what’s required to kill it. Again were waiting on technology catching up with demand though. 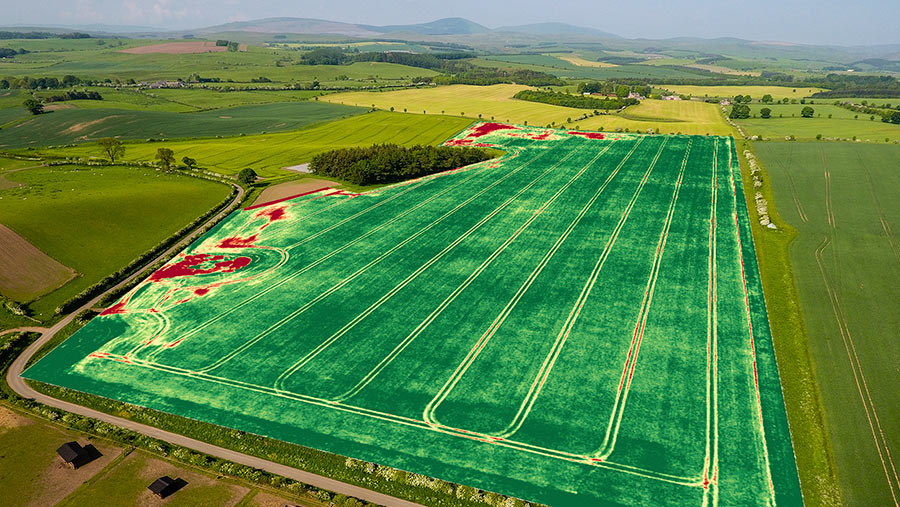 Using data harvested by his drone, Hugh Wrangham is keen to usher in a new era of ultra-accurate variable rate applications on his family farm in East Lilburn, Northumberland, some 20 miles south of Berwick-upon-Tweed.

Mr Wrangham, who is also an engineer, has been working in partnership with his brother Jack to start Drone AG, a company specialising in mapping crops.

How did you get into using a drone?

Then we started to hear more and more about using UAVs in agriculture and so started using a drone proactively from October last year.

We initially looked at using it to frequently map all of our crops, but soon realised that the data became so vast that it was difficult to keep track of.

We then took a step back and selected a few trial plots and specific fields to really focus on what we wanted to achieve. The quality of the data and the way you process it are the key things to consider, not the quantity.

Why are you using a drone for on farm?

In very basic terms, we think of the drone as a platform to carry the sensors on a flight path which allows the creation of a digital map of the field.

We want it to become something that is a regular process carried out on the farm by integrating it into the way we manage our crops.

I think it is really important to bring drone use into everyday life by integrating it with a task that you are already doing, like checking crops for weeds or disease.

That way you avoid just gathering loads of data that doesn’t really benefit what you are already doing on farm.

How do you use the data produced by the drone?

It takes about half an hour to set up the drone, get it in the air and map a 20ha field, so it’s pretty quick and will only use up about 50% of the total battery life.

We are mostly using it right now for weed identification as blackgrass is starting to be seen in small patches on the farm.

We have also managed to identify areas of stress within a crop that we would not have been able to spot as easily otherwise, but it is still quite early days.

Our next focus will be to feed the data into a variable rate applications system to get the obvious benefits of this, like getting very accurate input prescriptions to save us money, better target weeds and make the whole crop management process more efficient.

What type of drone are you using?

We’re using modified DJI Matrice M100 which is a type of quadcopter UAV with multispectral and sunlight sensors.

We bought it in February this year and we were already familiar with DJI’s other products, as we started out with a smaller version.

The basic carbon fibre platform cost £2,500 and once we bought batteries, sensors and the software it cost about £9,000 all in.

We chose a quadcopter over a fixed wing drone because they are easier to fly, having the benefit of vertical take-off and landing.

They are pretty simple to program, more affordable than a fixed wing unit and are also a lot more versatile because you can use them for mapping, simple scouting or even normal video work.

Has it changed the way you farm?

It has really changed our perception of how accurately and efficiently we should be managing our land. It is exciting looking forward to what we can now achieve with drones.

We weren’t that far advanced compared with other farms, but we are now starting to see uses for variable rate inputs and it is opening up new opportunities to use farm technology.

You do need to be thinking about what it is that you want to achieve before you go out collecting data because you’ll end up with information that you can’t use for any real benefit.

Using the software to process what the drone sees, we can pick out various issues with the crop. If you have an algorithm to spot grassweeds in wheat for example, you can apply this to the data you have.

Any plans to expand drone use?

Within a couple of years we expect that all of our crop inputs will be applied using prescriptions to get them where they are needed most.

We also want to build up a mapping record of our fields so that we have a history to help make better decisions. We hope that we will be able to automatically map fields and store them on one database.

We also envisage utilising spraying drones in the near future for targeted aerial applications of pesticides and nutrients to treat small scale irregularities within the crop.

This will depend on regulation changes for aerial applicators as well as product approvals for the application method.

As an alternative control method, this could complement our mapping processes really well in the future.