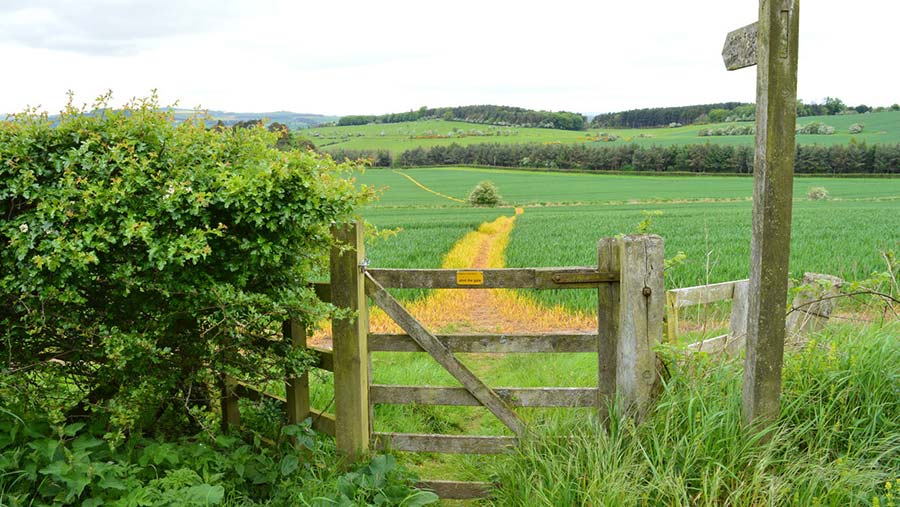 The majority of farms have some form of public right of way across them, whether it is a footpath, bridleway or byway. But when walkers are heading for your crops, what are your rights and responsibilities?

We look into the rules of farming near footpaths for landowners and arable farmers.

Who looks after public rights of way?

In England and Wales, responsibility for maintaining footpaths, bridleways and byways are divided between the landowner and the highways authority. Parish and town councils also have certain discretionary powers.

The situation is different in Scotland, as there is no definitive list of rights of way (although a list of “core paths” does exist) and access rights are different under the Land Reform Act. Nobody has a duty to maintain a right of way, although local authorities have powers to do so.

In Scotland you must respect access rights by not hindering or deterring people, act reasonably when asking people to avoid the area when land management operations are taking place, and work with local authorities to integrate access and land management.

What do farmers/landowners have to do?

In Scotland, landowners aren’t required to maintain a right of way, but they must not obstruct it and have a duty of care to people on their land.

The “right to responsible access” means people aren’t necessarily restricted to paths and can walk across uncropped fields where no path exists. However, such access rights are suspended as soon as a crop is sown until after harvest and walkers must keep to the field edge during this time.

Who keeps the path surface clear?

It is down to the landowner to keep cross-field paths clear from crops other than hay or silage.

In England and Wales, the highways authority is responsible for maintaining the surface of public rights of way and controlling surface vegetation (other than crops).

It is also responsible for steps, handrails, some barriers, drains, most bridges and culverts, stepping stones, fords, signposts and waymarks.

No one body or organisation is responsible for path surfaces in Scotland, although users have a common law right to keep routes clear of vegetation.

Farmers should use common sense to ensure core cross-field paths are walkable.

Can I plough or cultivate a cross-field path?

Yes, you can disturb a path surface when ploughing or cultivating the field, but if you do, you must reinstate a good path surface within 14 days of the first disturbance if a crop is being sown, or within 24 hours in other cases.

The surface must be returned to at least the minimum width, which is 1n for cross-field footpaths and 2m for bridleways. Signs should be used to show the route of any reinstated path. If the path runs along the field boundary, it is illegal to plough it up or cultivate it.

In Scotland, core paths across farmland must be reinstated within 14 days, although there is no specified width, other than to return it to the same as before.

Can field-edge paths be cultivated?

No. A crop – other than grass – must be prevented from making the path difficult to find or follow.

The public has the right to walk though crops growing on or over the path and they can also report it to the highway authorities, which have the power to prosecute or cut the crop and send the bill to the landowner.

Farmers in Scotland are advised to use common sense when cultivating fields to ensure people can exercise their right to walk around field boundaries if they choose to.

What if I use a contractor?

Where a contractor is employed to do work, the occupier is liable – irrespective of any contract terms – for any failure to restore cross-field paths or cultivation of field-edge rights of way.

Can I spray over a cross-field path?

Usually yes. But look at the product’s label for conditions. Some products require people and livestock to be kept out of the treated area for a period of time – do not use these if you cannot restrict access to the area.

For paths running alongside the field, care should be taken to make sure the public are not at risk. Consider using notices to advise people that pesticides are being applied and to ask them to keep themselves, children or pets to the path or access area.

However, you must not put up a notice that might stop people going onto the right of way or an area they have a right to use.

Contact the highways authority for advice – as you need their permission to put a notice on a right of way. It would be advisable to explain on the notice what the pesticide is and what it does, without using too much technical terminology that may not be understood.

Such notices cannot stop people using a public right of way and if people are still using it despite the warning notices operators should consider stopping operations briefly if there is a risk to health such as from the machinery or spray used.

Who to tell if there is an incident involving pesticides

If there is an incident involving people and pesticides then you should inform your nearest Health and Safety Executive (HSE) office. The HSE information line is 0845 345 0055 – they should be able to tell you the number of your nearest office. For emergencies out of hours call 0151 922 9235.

Public rights of way may form part of the 1-2m protection zone along hedges and watercourses. When they do, the GAEC 1 – establishment of buffer strips along watercourses – rules apply.

Can I get a footpath moved or changed?

Potentially, yes. Apply to your local highways authority if you think a route should be changed. You can also apply to get one closed or temporarily diverted for a specific reason.

What if I block a path?

Obstructing a public right of way is a criminal offence. Avoid obstructions on or across the route – for example, electric fences, walls, hedgerows, padlocked gates and barbed wire. Also make sure no vegetation encroaches on the route from the sides or above.