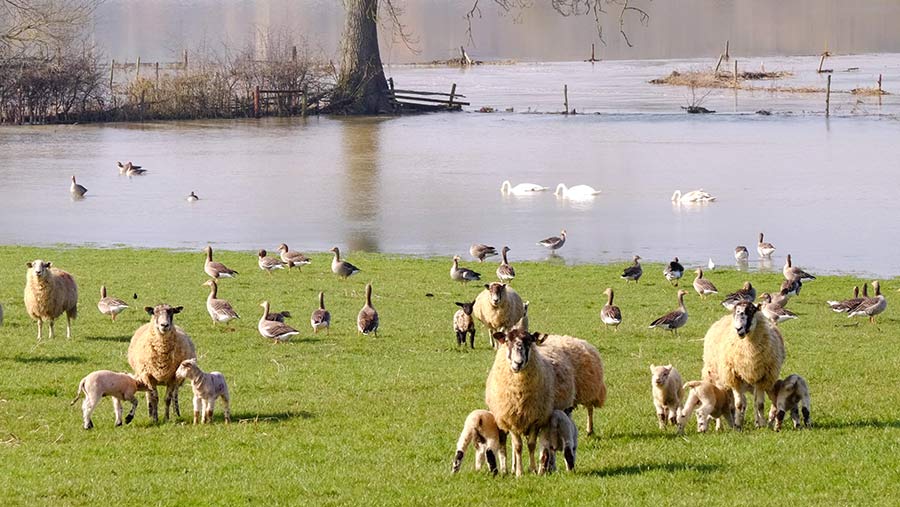 Fortunately, Defra acknowledges that in times of crisis, the normal rules temporarily do not apply, but once the waters have receded, they swing back into effect.

It has published a guide detailing what farmers in England need to know during and after a flood to eliminate the risk of losing Basic Payment Scheme or stewardship payments for rule breaches.

Farmers Weekly has pulled out what you need to know in a hurry:

If there is permanent damage

Where the flooding has had a serious and permanent effect, such as land being washed away and moving the boundary of the field, or if the field is covered by debris, then a farmer may be able to declare force majeure.

This is where they can be excused from meeting cross-compliance or countryside stewardship scheme requirements due to exceptional and unforeseeable circumstances outside their control.

Farmers must notify the Rural Payments Agency within 15 days of realising regulatory obligations cannot be met, setting out what happened and how this prevented them from complying.

If there is temporary damage

Flooded land is still eligible for BPS providing the flooding is temporary and the land would otherwise be available for agricultural activity.

Farmers are obliged to return the land to agricultural use as soon as possible and continue to meet scheme rules or requirements of agreement options on the affected land.

If the flooding means land temporarily cannot be managed according to the rules, a minor and temporary adjustment form (formerly known as a derogation) can be submitted to address this.

More information on the form can be found on the Gov.uk website.

If you need to move animals to safety

There is no legal barrier to moving animals endangered by flood water to safety.

Cross-compliance breaches, such as late reporting of births, deaths and movement, should be completed as soon as possible afterwards.

If cattle have been moved to a different holding, the British Cattle Movement Service (BCMS) should be contacted as soon as possible on 0345 050 1234 to ask for a retrospective movement licence.

This second licence will only allow animals to be moved back to the holding they came from.

If a TB test has been delayed, the Animal and Plant Health Authority (Apha) needs to be notified that it is due to flooding but no cross-compliance action will be taken.

Defra says that for there to be a breach of cross-compliance, the claimant must be directly responsible for any action or inaction.

Therefore, breaches caused by flooding will not be considered breaches as they are not the result of any action or inaction taken by the farmer.

This includes landscape features protected by Good Agricultural and Environmental Conditions (GAECs), such as stone walls or hedgerows being washed away.

GAEC rules also do not apply if there is a risk to human or animal health or safety, if it is necessary to control or treat serious causes of harm to plant health, or to prevent or treat serious pest or weed infestations.

No exemption needs to be requested.

A felling licence is not needed to fell a dangerous tree or remove a fallen tree.

Farmers should gather evidence that supports the decision that the tree was an imminent danger.

If possible, photos should be taken (with reference to scale) that show the tree setting and condition before and after felling or if fallen.

Other forms of evidence might include maps, site surveys or reports and, importantly, a record that confirms when tree felling took place.

For more information on felling trees, go to the Gov.uk website.

Protection against flood damage is not automatically included on farm insurance policies and farmers need to regularly review what they have protected, an insurance broker has warned.

Farmers who have a potential claim should notify their broker or insurer as swiftly as possible, take photos of the damage and seek clarity exactly what is covered, said Nigel Wellings of Acres Insurance.

There are no standard products in the UK that cover crops in the ground or movable property in the open, such as stacks of silage bales, meaning if bales are at risk, the only protection is finding a site that is less vulnerable.

Flood damage to farm buildings and their contents can be protected, and Mr Wellings estimates about 60% of UK farms have such cover.

Tractors and farm machinery can also be protected through a comprehensive tractor policy, with most policies covering attached and unattached implements, he said.