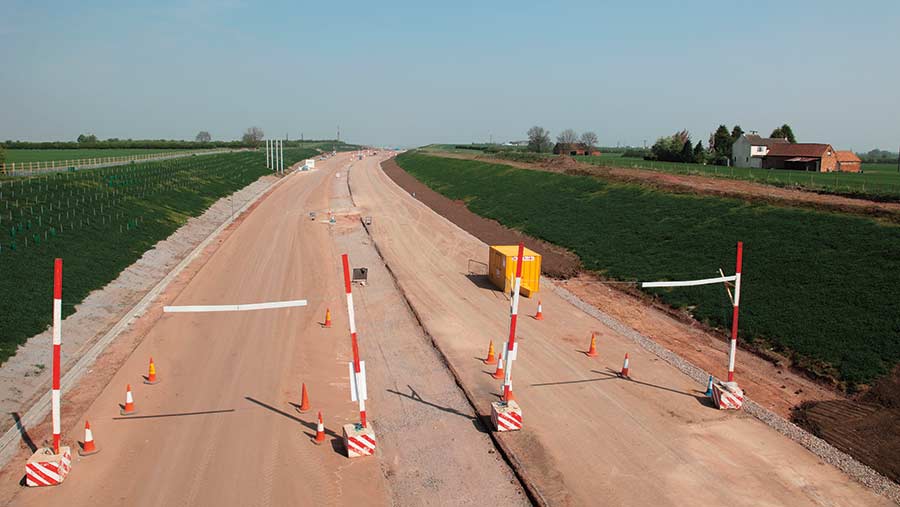 After several decades of neglect, the UK is once again investing in its infrastructure, with an associated rise in compulsory purchase projects. But how can landowners protect their rights and smooth the process?

Compulsory purchase is always a thorny issue, resulting in a growing number of disputes, but by acting early, landowners can minimise the effect on their business.

Some of those affected by compulsory purchase might expect to end up better off as a result, but that is very rarely the case.

The law states that the claimant should be left no better or worse off – but financial compensation does not always make up for the inconvenience and stress of the works.

Compulsory purchase is a complex area, and the impact of a scheme on a farm business can be devastating, so it is important to get the best possible advice from the outset.

In most cases, agents’ fees will form part of the claim, paid for by the acquirer of the land.

Main items claimants should be compensated for

The land taken – This is paid for at its open market value on the “valuation date”, which is usually the date when the acquirer takes entry to the land.

It is market value in a “no-scheme world” – so the price the land would fetch if the compulsory purchase scheme didn’t exist. That might be agricultural market value for land that has no other potential uses – but it could be more than that if the land was also suitable for some other use, from pony paddocks to, say, housing.

Disturbance – Landowners and occupiers can claim for the time and disruption caused by the project.

Keep a diary of the time you spend on the scheme, such as rounding up stock that have escaped because a contractor left a gate open. If there is any physical damage requiring repair, keep the receipts. These can then be added to the disturbance claim.

Severance and injurious affection – This is the effect on the claimant’s remaining land after the compulsory purchase has happened. Land might be left in odd-shaped fields, or stranded on the wrong side of the new road, so reducing its value. Accommodation works can reduce the adverse effects and so make this part of the claim smaller.

Effective planning and early negotiation can really help to minimise the effect of a scheme on the farming business.

An agent will be able to help with this. At the earliest stages of a project it might be possible to influence the route of the road or power line, for example, or request that inspection chambers for pipelines are sited at the edge of a field rather than in the middle.

Environmental mitigation is another key area, requiring the developer to minimise the effects on wildlife and habitats.

Developers may seek to create new wildlife habitats and the farmer might be able influence the location of these.

If the land is tenanted, it makes sense to have mutual discussions to minimise the effect on both the owner and occupier.

The earlier you negotiate the better, with the works to be carried out either by the contractor or the farmer and the costs added to the claim.

Get good at communicating

There are many different people involved at the various different stages of the compulsory purchase process and it can be hard for the farmer or landowner to know who the best person is to speak to.

Good communication from the start to the end of the project is very important.

It will help to use your agent as a single point of contact.

The first people to be involved will usually be the land referencing team, who will identify ownership and occupation of the land. Then will come the surveyors – from ecologists to engineers.

Once the work starts there will be contractors on site and it is important to know that everyone has the right authorisation at the right time.

In most cases visitors are unlikely to require chaperoning, but where health and safety is an issue, farmers may need to accompany them and should claim for the time involved in doing so.

This is an area that frequently results in disputes.

In principle, the authority acquiring the land is responsible for the project, but in practice they will devolve quite a large amount of the responsibility to contractors.

The golden rule is not to negotiate with contractors – in all dealings, go directly to the acquiring authority.

The only exception to this rule is where a contractor requires somewhere to store plant or machinery close to the works.

Here, the landowner can come to a private arrangement with the contractor.

This will be entirely separate to the compulsory purchase claim, so ensure it is covered by a proper written agreement.

Reinstatement of the land

It is vital that land is properly reinstated at the end of the scheme. Sometimes the contractor will carry out this work, or the farmer can undertake it himself in return for payment.

It can take years to bring land back into full agricultural use, so it is usual to reserve the right to claim for future crop losses and to remedy drainage defects.

Compulsory purchase of land has the same tax implications as an unforced sale, so if it has generated a capital gain, then tax will be chargeable.

Many claimants will roll over the proceeds into replacement land, but that is not always possible.

If the money is retained as cash that could have implications for inheritance tax planning, so take professional advice.

How to find a good agent

Compulsory purchase is an extremely complex area and failure to handle it properly from the outset can have significant consequences for the farm business.

It is therefore vital to appoint specialist, experienced advisers who understand the procedures, can protect your interests and negotiate the appropriate claim.

Agricultural valuers who are fellows of the CAAV will have the letters FAAV after their name, demonstrating they have passed the CAAV’s professional exams.

Ask about their recent relevant experience in compulsory purchase and if your usual agent isn’t an expert in this area, ask them to refer you to someone who is. There are 1,600 fellows across the country and there is a searchable database of members on www.caav.org.uk.

Being subject to a compulsory purchase is rarely a happy experience, but with the right professional support and advice, the effect on the farm business can be kept to a minimum.

The government has been reforming many parts of compulsory purchase law to try to make the process quicker, cheaper and simpler for acquiring authorities.

The Housing and Planning Act (HPA) 2016 has introduced new powers to enter and survey land in connection with a compulsory purchase proposal.

This covers both the site itself and land “in connection” with it, which may include surveying adjacent land for migratory bird routes, for example.

The person taking entry must give 14 days’ notice and carry written authorisation – refusal of entry may result in application for a warrant.

Activities that can be carried out range from excavating trial pits and digging boreholes to taking samples and leaving monitoring equipment on site. Compensation is payable only for damage caused.

Under the HPA, developers of large nationally significant infrastructure projects (NSIPs), such as major transport schemes, will be able to apply for related housing development as part of the scheme.

Although these new powers are not yet in force, they have potentially huge implications for landowners, because if the acquirer purchases the land at existing use value, they will benefit from the resulting uplift in value, not the landowner.

The latest round of consultations on further reforms has just closed and we are awaiting a new Planning and Infrastructure Bill to bring more changes into effect. One of these is the proposal to increase the statutory rate of interest on late payments from 0.5% below base rate to 8% above it.

The CAAV is concerned that the government’s commitment to drive growth and infrastructure is causing a lack of care of landowners’ property rights that are a key part of business investment in a market economy.