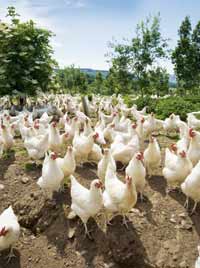 Trends in the poultrymeat sector show there have been winners and losers, but overall the sector remains buoyant, as Scott Casey reports

The RSPCA has lauded a £55.2m increase in spending on Freedom Foods chicken, describing it as “absolute proof” chicken welfare is of high importance for consumers.

Sales in the 52 weeks to March 2010 increased from £16.4m to £71.6m, according to latest figures from Kantar Worldpanel – a rise of over 300% (see below). “These results far exceed anything we could have predicted,” Freedom Food chief executive Leigh Grant said.

The Kantar Worldpanel figures also show that, in the 12 months to March, “standard” chicken recorded a downturn in UK sales, dropping more that £26m. But it still remained dominant in overall market share with £1.12bn in total sales.

The volume of Freedom Food chicken sold in supermarkets rose from 5.6m kg to 20.7m kg, compared to an 11m kg decrease for standard chicken to 305m kg.

Robert Newbery, the NFU’s chief poultry adviser, said he believed the increase in Freedom Food sales was mainly due to a “downshift” by producers from more expensive production methods, such as organic or free-range, towards Freedom Foods standards.

“I think what we’ve seen is an overall downshift through the categories, so organic suffered very heavily and customers dropped into free-range, and free-range dropped into Freedom Food. We’ve also seen quite a lot of migration from standard into value,” he added.

“We should not shy away from the opportunity to add premium products, or charge more for products, because in the right circumstances people are very happy to pay,” Mr Banks said. 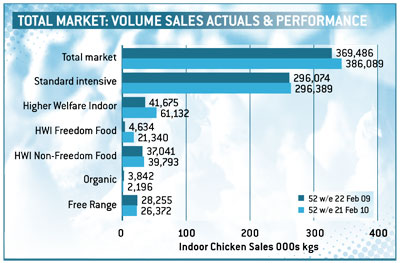 In the wake of the latest consumer data the RSPCA has written to supermarkets urging them to provide more welfare-friendly options for consumers by stocking slow growing breeds.

“We are asking all UK supermarkets to take the next vital step and commit to only using a genetically slower growing breed for all chicken, in line with the requirement that already exists under the Freedom Food scheme,” said RSPCA senior chicken welfare scientist Dr Marc Cooper.

“Science and practical experience clearly demonstrate that this would lead to an even greater improvement in the welfare of many millions of chickens.”

“We’ve seen an incredible commitment from supermarkets like Sainsbury’s, Tesco and Morrisons to improving the lives of chickens, but there is still a way to go in our mission to see improvements for the vast majority of chickens reared for meat,” he said.

Poultrymeat has enjoyed good growth over the last 12 months with sales, volume, and prices all moving up but the market is expected to hold steady over the next year.

Over the year to February 2010 sales of chicken meat grew 4.5% with the value of those sales increasing by 6.1%.

But the real success story of the industry has been the rise in sales of high welfare meat, with Freedom Foods recording a massive 360% increase in sales by volume while the welfare sector grew in total by 46.7%.

Overall, the higher welfare sector – including Freedom Foods, free-range and organic – now accounts for over a fifth of fresh chicken sales by volume and a quarter of sales by value.

Standard chicken was stable notching up a barely noticeable 0.1% increase in sales, remaining the clear leader with 77% of the market.

Duck has demonstrated positive growth over the last 12 months with prices increasing by 5% to an average 300p/kg. The price has come a long way since its most recent low point in February last year which saw values drop to 260p/kg.

In contrast to the rest of the poultry market, turkey has experienced a decline with meat prices dropping to 318p/kg from a peak of 325p/kg in March 2010.

Poult placements have also fallen below 2.9m for the first time, signalling what could be a longer term decline for the sector.

The impact of the low prices of feed is expected to continue throughout the year as raw materials prices remain low, say analysts.

The industry can look forward to a boost in profitability this year as meat prices firm slightly while feed costs remains low, making the production of birds for slaughter more profitable.

Despite this, production is not expected to increase significantly across Europe in 2010 with the US Department of Agriculture predicting only 0.1% growth across the 27 member states in its latest supply and demand report.