Most dairy producers considering the switch to organics expect a drop in yields. However, one Cornish estate has managed not only to maintain herd performance, but increase overall milk output by 15%.

Penheale Estate runs two dairy units, both having completed organic conversion in 2001. Previous to conversion, both averaged 8200 litres a cow, which was a yield farm manager, Simon Oates, believed would drop by 15-20%.

The move towards an organic system was motivated by estate owner, James Colville. “We have traditionally been a high-input, high-output system,” Mr Oates says. “Which is why I expected the drop.”

The two herds, totalling 310 cows in milk, are mostly pedigree black-and-whites, requiring high inputs. “If we drop back on concentrate or forage intake, welfare would suffer overall,” says Mr Oates.

Trillacot and Hole dairies are run as separate units with two distinct management approaches, he adds. “A TMR system is used alongside in-parlour feeding at Trillacot and a less labour-intensive, one-man-band operation of easy-feed silage and out-of-parlour feeders is used at Hole dairy.”

Instead of merging the two units, the estate plans to continue running the different systems alongside each other. “Having two comparable management units, which both achieve similar performance levels, allows us to concentrate on key management activities, such as forage management,” Mr Oates explains.

Growing forage takes priority on the 340 ha (850 acres) and maize is being grown for the first time this year to maintain energy levels.

“With the change in organic feed derogation scheduled to come into force in January, producing a balanced ration is paramount, which is partly the decision behind growing maize, something we have steered away from in the past because of our organic status. But recent performance on organic farms has shown comparable performance with conventional systems.”

Land is predominantly wet, grade three or four, and average rainfall is 140cm (55in), he adds. “This limits our growing capabilities somewhat, but enables us to concentrate on what we grow well, grass.”

“We crop 100 acres of cereals, 70 acres of lucerne, 40 acres of maize and the rest grass, with some fodder beet sown as a weed suppressant. Mustard is drilled after cereals as a green manure before land is returned into the grass rotation.”

Replacement heifers and youngstock, which total 100-120 bulling heifers and 100 youngstock, are managed together from the two units. Three months before calving they return to their respective herds. “We have traditionally been an autumn-winter calving herd, but we are moving towards year-round calving to sustain a more consistent supply for our milk processor, Dairy Crest,” says Mr Oates.

One of the biggest differences post-conversion was the use of concentrate feed, says Mr Oates. “Before organic conversion, 50% dry matter intake was made up of concentrates, whereas that figure is now less than 40%, which, we think, has resulted in an adjusted rumen function. 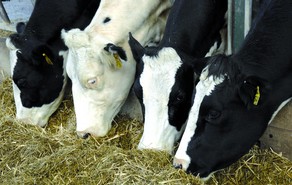 Silage is better quality, despite being cut 10 days later than a conventional crop. “We usually take three cuts, which includes 50-60 acres of annually reseeded herb, clover and ryegrass silage leys.”

“Trillacott is averaging 78% of its dry matter intake being home produced, whereas at Hole, where it is a more cake-reliant system, it is more like 70%,” says Mr Oates. Having achieved 3000 litres from home-grown forage last year, the aim is to increase this to 4000 litres, he adds.

“Cows are giving more litres, but maintaining the same condition without being pushed. This has had a knock-on effect for fertility and overall health,” he says.

“We condition score regularly, something the vet has taught all staff to do as part of the routine.”

Careful home-grown forage management and a switch to organics has considerably increased yields on a Cornish unit.

Maximising milk yield achieved from forage is a key objective at Penheale.