Volatile input costs are eating into margins for many growers, despite the high grain prices, and even the most business-minded farmers have scope to cut operational costs.

That was one of the key messages at the Joint Venture Farming Group conference in Bedfordshire last week.

“The bar is always dropping and there’s never a lowest level of cost,” said consultant Jamie Gwatkin, as he unveiled the JVFG costing analysis for harvest 2010.

The results, based on actual figures from a sample of JVFG members farming 15,811ha of land showed that overall labour, machinery and general overhead costs fell slightly last harvest to £246/ha. That figure, which excluded direct crop costs (seed, fertiliser and sprays), was 0.5% lower than the 2008-10 average, although it masked wide variations between specific areas.

Labour costs were almost 2% higher than the three-year average in 2010, at £61/ha, largely due to a 4% rise in rates (excluding management), up from £11.97/hour to £12.50/hour. But overall labour efficiency increased last year, helping offset some of the higher cost.

Average machinery costs in 2010 were 3.4% lower than the three-year average at £152/ha, despite rises in fuel prices and stubbornly high harvesting costs. “Work rates increased by 20% overall which resulted in the fall in cost per operation,” Mr Gwatkin said.

Establishment costs (primary & secondary cultivations, drilling and rolling) were reduced by 11% last year to an average of £88/ha, although there was a wide range between the best and worst performers of £73-108/ha.

Mr Gwatkin was unsure why harvesting costs were proving particularly difficult to reduce and pointed out that only a 3% saving had been made over the three-year period. “The highest costs (£92/ha) were about double the lowest, so it’s clear there’s still a lot to learn about how we can reduce harvest costs.”

There was a similar picture for oilseed rape, where operational costs averaged about £45/t, but ranged between £31/t and £59/t.

“We know that there will be a reduction in the single payment in the future and with volatility here to stay, there will be pressure on profits in the future,” he said. “As a farmer, you just have to concentrate on what you can influence and that means looking closely at where you can cut costs at the same time as maximising yield.”

“Daily price monitoring will be key in 2011,” said Mr Gwatkin. “I see volatility as one of the biggest opportunities for the UK arable sector. But if you’re going to take advantage of movements, you need to know where your costs are, where the market is and where the margin is in relation to that.”

He urged farmers to develop a marketing plan to remove the emotion attached to selling grain in such volatile markets. It was also important to:

• Have a target price – know your costs and the current market

• Have a contingency plan in case the market falls

• Sensitivity analysis – what will happen if prices rise or fall £20/t?

• Manage the feed base first, then add premiums for quality 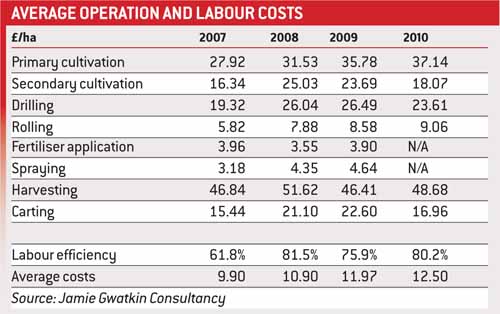