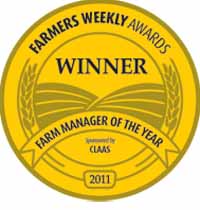 What do the five faces below have in common? They’ve all been named Claas Farm Manager of the Year in the Farmers Weekly Awards.

In the last five years, Farmers Weekly, with the support of our sponsor Claas UK, has helped identify five of the best among Britain’s farm managers.

In 2006, Adrian Cannon lifted the trophy in a glittering ceremony at London’s Grosvenor House Hotel, to applause from farmers, advisers, politicians and hundreds of people from across the farming community.

Now, as the category’s independent judge, Mr Cannon is clear about what will make the 2011 farm manager of the year stand out. “Farm management is a diverse business, but core ideals and clear vision are required to be successful.

“To be the best, the individual needs to have strong principles and be in control of the business. I will be examining the management systems in place to achieve profitability. Key skills such as risk management, project planning, staffing, compliance with legislation and an eye for attention to detail will be sought.”

Last year’s winner, Alastair Brooks, is farms manager at the 5700-acre Waddesdon Estate in Buckinghamshire. “As well as being a major high point in my career, becoming Farm Manager of the Year has strengthened my confidence and determination to keep going in the same direction with the business that I manage.

“As well as this it has been a way of thanking those people that have helped, both now and in the past.”

The Farmers Weekly/Claas Farm Manager of the Year award has also helped many of its winners further develop their careers.