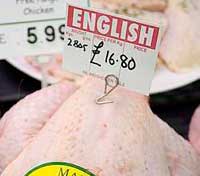 Country-of-origin labelling has moved a step closer after MEPs voted in favour of introducing labels indicating where food is produced.

Under rules agreed by the European Parliament Environment and Consumer Protection Committee, the origins of meat, poultry, dairy products and vegetables will need to be identified.

The committee also approved plans to carry country of origin labels on meat and poultry used in processed foods.

Meurig Raymond, NFU deputy president, said the committee’s backing was a “significant victory” for lobbyists but more work needed to be done before member state ministers voted on the proposals later in the year.

“There is still a long way to go and I’m sure the change to labelling rules will be challenged strongly by others in the EU,” he said.

“People buying meat and dairy products want to know where the animal was reared so they know exactly what they are getting.

“Consumers also want consistency in labelling across all sectors and deserve not to be misled.”

“I hope very much that the entire European Parliament will vote in favour of the amendment when it comes before them later in the year,” he added.