The evening before Jim Aplin sets out his weekly vegetable stall at Stroud farmers’ market, he can often be found checking out Tesco.com – Britain’s biggest online supermarket – just to make sure his prices are competitive.

“I’ve never had to change anything after I’ve done it, but as a rough guide it’s always good to know we are cheaper than the supermarkets and can beat them at their own game when it comes to selling organic produce,” he says.

Mr Aplin’s savvy sales strategy illustrates just how far the sector has come since a handful of West Country farmers drove into Bath and started selling their produce directly to shoppers at Britain’s first farmers’ market in autumn 1997.

True, direct selling remains a niche sector, but the boom in producers doing it has been one of British agriculture’s biggest recent success stories. Today, there are more than 600 farmers’ markets in the UK, with an annual turnover of £220m.

But like the big supermarkets, small farm retailers are feeling the effects of the credit crunch. Few people talk about it openly, but farmers’ markets and farm shops are finding themselves at the sharp end of the economic downturn.

The National Farmers’ Retail & Markets Association (FARMA) has warned of “clouds in our sunny skies” ahead of its annual three-day conference, which begins in Newcastle-upon-Tyne on Monday (10 November).

A supermarket drive to offer “local” food at knock-down prices, the rising cost of living and a stressed economy entering its first downturn for 16 years all threaten to take their toll on farm shop owners and stallholders.

“Those on the edge are certainly suffering,” concedes FARMA’s managing agent, Gareth Jones. “When you see profits falling by more than 30% at a mature business like Marks & Spencer, it’s understandable that we are suffering, too.”

But it is not all doom and gloom. Farm food outlets that have planned for growth are still growing, albeit more slowly than hoped. And weekly farmers’ markets are faring better than monthly ones.

“The move towards weekly markets is important for the sustainability of the sector,” says Mr Jones. “Consumers find it easier to remember when they are being held and they are more likely to use them as a replacement for a supermarket shop.”

But a weekly market alone is unlikely to keep the wolf from the door, he adds. “There’s a lesson here for everyone. It’s a case of shaking up your offer and realising that the consumer wants something that recognises that the credit crunch is here.”

This might be as simple running a product promotion or highlighting a bargain of the week, says Anthony Davison, a fifth-generation farmer, who set up BigBarn.co.uk, a website that acts as an online gateway to 7100 farm shops. 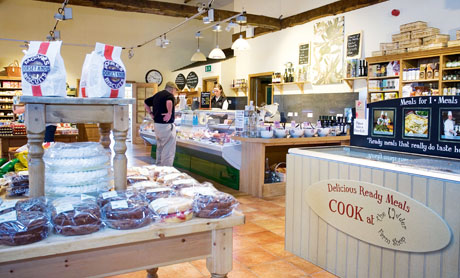 “The first thing we must do as an industry is point out that local food is often cheaper and that people should go looking for it. People should shop locally every week and keep their supermarket habit to once a month or once every six weeks.”

Half the battle is making it easier for people to buy, says Mr Davison, who helps farm retailers set up their own online shop free of charge. Recipes and menu suggestions can encourage people to make the most of their purchases.

“It’s all down to persuading people they are getting a better deal and a better product. We have got so used to supermarkets saying they are cheaper, that we believe them. It’s actually a load of crap.”

Even where prices are more expensive, farm outlets should highlight the fact that they offer a better service, higher-quality food and a more enjoyable shopping experience, says farm retail expert Garry Stephenson, who co-ordinates the Small Farms Program at Oregon State University, USA.

Mr Stephenson, who is due to speak at the FARMA conference, believes British farmers can learn from the US experience, including research that shows happy customers are often more important than short-term profit-seeking.

“Relationships with customers and other aspects of the communities in which farmers and farmers’ markets operate are very important,” he says. “A loyal customer base and a supportive community may help weather the storm.”

“It starts with access into the store and organising the flow of customers throughout the shop. The more cleverly thought-out shops have a layout that ensures the customer doesn’t leave the store until he has walked every inch of it.”

Aggressive marketing strategies employed by the big four supermarket chains might be viewed with suspicion, but Mr Davis says the farm retail sector can learn a lot from Britain’s retail giants when it comes to product placement.

“In any supermarket, everything is placed where it is most likely to sell. Positioning and presentation are paramount. But plenty of farm shops have little or no atmosphere and customers are unlikely to feel ‘retail happy’.”

Stallholders, too, are learning lessons. In Surrey, Milford farmers’ market was recently redesigned so the stalls form a compact rectangle, which encourages customers to spend more time – and money – shopping there.

It is early days, but footfall has already increased, says Iain Lynch, market manager at Waverley Borough Council. “We’re still pulling in the money, although there is no doubt the economic downturn means stallholders are having to work harder.”

They are also working smarter. Selling direct does not have to involve a hefty investment, but paying attention to detail can help boost dividends, says Stroud farmers’ market organiser Clare Gerbrands.

“It might be something as simple as chalking up your prices on a blackboard, rather than writing them on a whiteboard with a marker pen.” Success, it seems, is about meeting customers’ expectations – and then surpassing them.