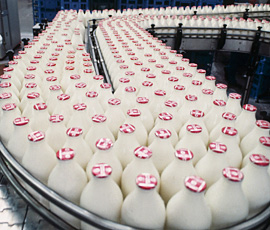 Milk producers are holding an emergency meeting following milk price cuts that will wipe more than £50,000 off the average dairy farm income.

Farmers from across the country are expected to attend the event, due to be held at the Stafford Showground at 1.30pm on Wednesday (4 July).

Speakers at the meeting will include NFU vice president Adam Quinney and NFU dairy board chairman Mansel Raymond.

It comes after three major processors slashed announced another round of price cuts that have now wiped some 3.7p per litre (ppl) off the farmgate milk price.

The price cuts are due to come into effect on 1 August.

They follow a similar round of cuts in May when a 2ppl cut by Dairy Crest was followed by Robert Wiseman Dairies and Arla Foods. Smaller processors have also cut prices.

The cuts take the farmgate price for a standard litre of milk to below 25ppl.

They will mean a £53,000 a year loss for an average non-aligned milk producer, assuming a break-even production cost of 29.33ppl calculated by Kite Consulting.

Dairy Crest’s standard litre price drops to 24.92p/litre from August 1, following a 2p/litre cut in May but the company has committed to no further price cuts for the rest of this year.

Farm minister Jim Paice said: “These further price cuts are disappointing as they appear to fly in the face of rising prices in global markets.”

He added: “They show how important it is for the industry as a whole to agree on a voluntary code of practice on contracts as soon as possible.

“Time after time I’ve been saying how crucial it is for farmers and processors re-build trust and work together to take advantage of the huge future opportunities for the British dairy industry.”