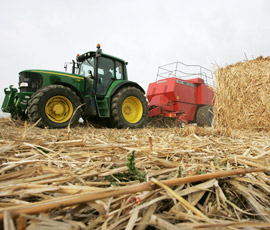 Farmers were encouraged to grow more miscanthus with the launch of two new contracts from International Energy Crops and an increased price for material going into Drax power station.

An index-linked price of £63/t for 15% moisture bales is available for miscanthus delivered from within 60 miles of Selby, some £7/t on top of the standard inflationary rise from last season. About 80% of the 10,000ha of miscanthus grown in the UK goes into Drax power station for co-firing alongside fossil fuels.

IEC’s Keith Wilson said the company was keen to attract growers against the background of strong prices for other arable crops. “At a yield of 20t/ha for little or no inputs, miscanthus will keep up with cereals at that price.”

In addition to the increased price for its standard production contract, IEC also launched two new long-term contracts for miscanthus growers. The 10-year contract farming agreement and seven to 10-year farm business tenancy option both feature an index-linked return, but give farmers or landowners the option to share risk and reward (see table).

Under both arrangements IEC will take responsibility for establishing and managing miscanthus on sites of 20ha or more for up to 10 years. After that time, the mature crop will be returned to the farmer for any use.

“We are putting our money where our mouth is in miscanthus growing,” Mr Wilson said. “Those who may not be confident in their own ability to establish and bring crops into full production can rely on us to do the job and pay them for doing so at attractive rates, based on yield potential, area involved, location and specific farm conditions.

“Our new contracts mean there is no longer any excuse for anyone failing to seriously explore the huge potential the energy crop has to offer.”

Grow your own fuel

For those considering miscanthus for the first time, one way to get into it on a relatively small scale could be to grow the crop to supply a biomass boiler, Mr Wilson said.

IEC has just teamed up with German boiler manufacturer, Heizomat, to distribute their boilers in the UK. “There is 3,000ha of miscanthus grown in Germany and all of it is used for heat,” Mr Wilson said.

“About half a tonne of miscanthus is needed per kilowatt of boiler capacity and we reckon miscanthus chips cost less than half the cost of heating oil.

“Fuel security is an increasing issue for everyone, but farmers effectively have an opportunity to grow their own fuel. While we’ve still got a 50% planting grant for miscanthus and the Renewable Heat Incentive, there’s never been a better time to do so.”

IEC is about to install a 200kW demonstration boiler at its HLW Farms in Shropshire, running only on chipped miscanthus. The system will cost £145,000 to install, but will provide enough heat for a 4,000sq ft farmhouse, two 1,800sq ft cottages, 3,300sq ft of offices, three workshops and an indoor swimming pool.

For anyone interested in a smaller boiler system, he said about 30kW would be enough to heat a standard small farmhouse, requiring 15t of miscanthus a year. Such a system would cost £20,000-21,000 for the kit, plus another £4,000-5,000 for installation, he said.