Currency could play a bigger role than ever in the level of farm income this year, with the referendum result set to affect the value of the pound dramatically either way.

This would mark a slight improvement on the recently announced figure of £3.77bn for 2015, which was a 29% fall compared with 2014 and in real terms represents just half the value of farm income 20 years ago.

Mainly on the back of referendum uncertainty, the pound has lost about 10% this year against the euro, helping to promote exports but raising the cost of imported goods such as machinery. It has lost less against the US$. 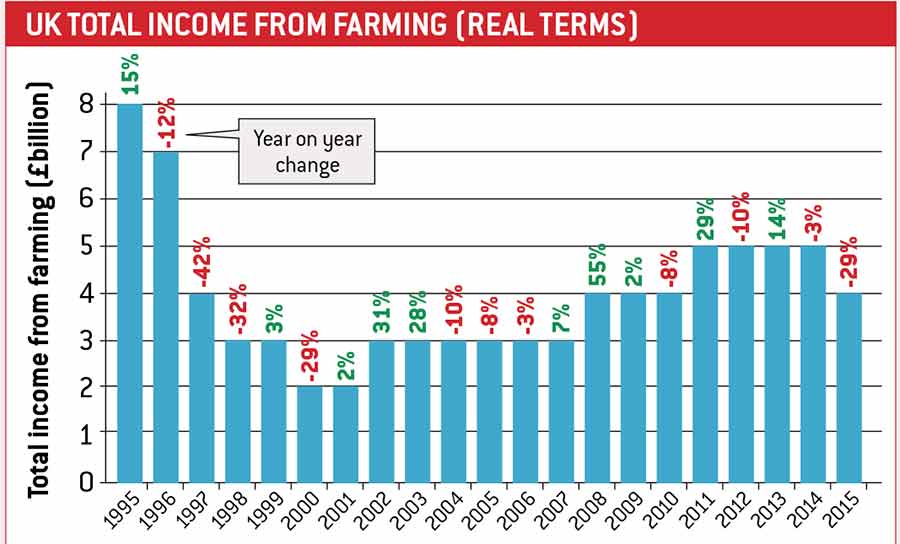 Andersons partner and research economist Graham Redman said that the firm’s prediction of a slight rise in Tiff for 2016 assumed that the weaker pound (compared with last year) would allow some export clearance of the backlog in some commodity stocks.

If the pound remained at current levels it would restore about 8% to the value of this year’s BPS. Predictions vary widely as to the likely impact of the referendum result on the value of the pound, with a “remain” vote tipped to see sterling strengthen by about 3-5%.

A vote to leave, however, could prompt a drop of up to 30%, favouring UK exports massively in the short term but with all-round costs to the economy. A drop of this magnitude could add value and profitability which would feed through to farm level in the short term, said Mr Redman.

The long-term effect would be inflationary, pushing labour and other costs up, he warned.

The 29% farm income fall in 2015 included a 7% drop in the value of Basic Payments as a result of the relative strength of the pound.

Despite higher production in many commodities last year, the slump in farmgate prices pushed down total output value by 8%.

Most of the remainder of the drop in Tiff for 2015 was accounted for by increases in labour, rent and higher interest costs as borrowing rose by more than 11.5% between December 2014 and December 2015. Some energy and feed cost reductions helped achieve savings of about £400m.

Lower farmgate prices caused by oversupply alongside the intensifying supermarket price war are estimated to be benefiting the average UK household by about £400 a year, according to analyst Kantar Worldpanel.