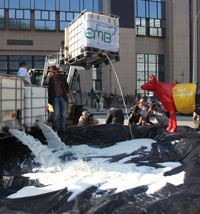 Milk strikes have continued across Europe this week, with thousands of continental producers spraying milk on fields, blockading dairies and on Monday (21 September), creating a milk lake in front of the EU Commission building in Brussels.

The strikes have been co-ordinated by the European Milk Board in response to the collapse in milk prices that has hit the sector this year.

“Milk producers started these protests out of desperation,” said EMB president Romuald Schaber in a letter to EU Commission president Jose Manuel Barroso. “Tens of thousands are on the verge of ruin, because the increase in volumes operated by EU politicians accelerated a slump in prices in an over-saturated market.”

One of the EMB’s key demands is for an immediate 5% cut in milk quota, and more “demand-driven supply control” in the medium term.

As well as a “fire and milk” demonstration in Brussels, French producers blockaded dairies around the country this week, while Belgian farmers sprayed millions of litres of milk on fields in the Walloon region. In Germany, farmers set fire to straw pyres and put them out with milk, while on Tuesday, Italian dairy farmers blocked the Brenner pass to Austria.

There are disputes about the number of farmers taking part and the effect the strike is having. The European Milk Board says more than 80,000 milk producers from eight countries are on strike, with many thousands more expected to join shortly.

But a statement from the French Federation of National Milk Producers (FNPL) says that just 7000 farmers, or 8% of the country’s milk producers, are withholding milk in that country, while the German farmers’ union DBV says less than 200 farmers (1%) are taking part in Germany.

Joop Kleibeuker, secretary general of the European Dairy Association, told FW that, while times were difficult, none of his members had reported any significant problems with getting enough milk to process. And Marie-Pierre Vernhes of the French milk industry body CNIEL confirmed that supplies were sufficient in France.

But, while the strike has not impacted on supplies to supermarkets, it has scored some political successes, with 19 member states now supporting a Franco-German call for a quota freeze and higher intervention prices. The French government has also launched a €250m loan scheme, targeted at young farmers and recent investors.

EU agriculture commissioner Mariann Fischer Boel has also agreed to allow state aids of up to €15,000 to individual dairy farmers, and says the commission will tweak the quota system to allow member states to take a small amount of quota off the market.

NFU president Peter Kendall this week wrote to Mrs Fischer Boel encouraging her to stick with the current policy, including the gradual phase-out of milk quota. “Like the commission, we are absolutely clear that milk quotas have played no role in the current crisis,” he said.

But Belgian dairy farm leader Erwin Schopges said Mrs Fischer Boel was “not fit for the role” of agriculture commissioner.