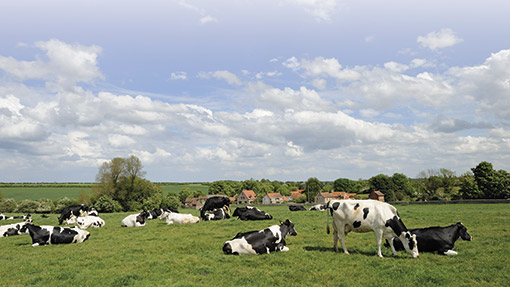 Falling farmgate prices have left many dairy farmers in crisis. Charlie Taverner debates the causes of the price drops and asks what the industry can do to protect itself.

How we got here

The price crash dairy farmers are facing is a harsh welcome to life in a world market.

Since February, global commodities have lost 48% of their value. This has caused UK farmgate milk prices to fall 5-7p/litre in just six months, taking many producers dangerously near to or below their cost of production.

British supermarkets are not blameless but dairy farmers across the world are also suffering, due to soaring milk production, Chinese buyers staying hesitant and Russia’s continuing import ban.

Government, farmers’ unions and dairy processors have led UK dairying into a competitive, world marketplace since 2012 and argue that means sharing the highs and bracing for the lows.

Yet waiting patiently for a rebound is hardly popular, not when Farmers For Action (FFA) is out in protest and the number of English and Welsh dairy farmers is set to drop below 10,000.

So what are the key arguments?

Roughly 85% of UK dairy products don’t leave the country and half of milk is bottled for liquid sales. So why are world markets used as an excuse for price drops?

Prices at home must always follow the movements of global markets, in order to stop buyers switching to cheaper, foreign products.

The large British market offers a degree of protection, although its precise worth is hard to measure.

While world dairy commodity prices have dropped by almost half, UK prices are down 20-30%.

“We don’t have as strong a link to world prices as Australia, New Zealand and other European countries and that does mask some of the volatility,” says Mr Crossman.

“But the domestic situation can only keep you away from that for so long.”

Supermarkets are locked in a ferocious price war and milk has been a battleground since the spring.

The rush to £1 for four pints, then Iceland’s recent cut to 89p, has eaten into the UK’s buffer from world markets.

Margins on liquid milk are miniscule: Dairy Crest’s dairies division was loss-making in the six months to September.

If retailers charged a bit more, consumers say they would pay – but would it resolve the crisis?

“In theory, if the value for the end product increased it will benefit everyone down the chain,” says Mr Crossman.

“But in practice supermarkets have the view that milk is a necessity that gets people in their shops. Until that changes it will still be one of their main competitive products.

The challenge would be making sure farmers got a share of bigger margins.

However, the instant impact would be increasing the worth of dairy products in the eyes of the public.

Batten down the hatches

If we accept that world markets are largely in control, all that’s left is to shore-up businesses at home and wait for recovery.

UK milk production is still running 7.8% higher than last year, European countries such as the Netherlands, Germany and Ireland are pushing the limits in the last year of quota and New Zealand’s output has remained strong right into the southern hemisphere flush.

The European Commission and Rabobank have forecast lower prices to continue until the second half of 2015.

Any tightening of supply would be delayed by falling feed costs encouraging higher production, quota abolition and a lag before lower returns impact force farmers to rein in output.

Charlie Hyland, commodity risk manager at trader INTL FCStone, said butter and cream markets could show stability before Christmas, but the outlook for the new year was less certain.

“We’ve still got a bit of room for milk prices to reduce further in the next three to six months,” Mr Hyland says.

“At that stage, with the milk prices lower, we see a pull back in production and an increase in demand.”

How to stop the next crisis

But it won’t be British and Europeans using more cheese, butter and milk powder; the demand will come from fast-changing markets like China.

If the UK is to meet its target of wiping out the dairy trade deficit and tap into rising world consumption, involvement in world markets is unavoidable.

That brings volatility – times of high prices and moments when they crash back down, as is being felt right now.

Little can be done to speed up the recovery, so the discussion perhaps needs to move to what will make processors and farmers fit for the global game and cope with the next slide in prices, when it inevitably comes.

UK farmgate prices have fallen 10-20% in half a year: that kind of sudden shock helps no one in the supply chain.

Farmers have few tools available for them to manage these sharp ups and downs and more work is needed.

“Tools to manage volatility are being looked at by a number of parties and been talked about now for five to 10 years,” says Kite Consulting managing partner John Allen.

“Each time there is another crisis, things get a little bit closer.”

One option is formula contracts that make price changes more transparent by tracking a bundle of commodities and on-farm costs.

Dairy Crest suppliers’ group Dairy Crest Direct has offered one for 18 months, while Muller Wiseman has developed its own.

Another option is futures contracts that let farmers take financial positions to protect them from shifting prices. It’s not yet possible in the UK and could be too expensive for individual producers.

One more is fixed-price contracts, where farmers are paid a guaranteed farmgate return for several months, with the processor shouldering the risk.

Several observers say this option isn’t too far away.

Supermarkets attract protesters’ anger but on the surface pay some of the best farmgate prices around.

Tesco, Sainsbury’s, The Co-op, Waitrose and M&S all run dedicated pools to fill their liquid milk needs, while Morrisons is planning a formula-style liquid contract.

The supply schemes pay their farmers prices linked to cost of production and have stayed comfortably above 30p/litre in the current crisis.

But these pools have a distorting effect on the thousands of non-aligned British farmers who supply extra milk for their other dairy needs.

Those groups are expensive to run and retailers claw back cash by pushing down the other prices they pay to processors, as well as extracting gross margins of about 40% on cheddar.

Politicians can play a part. Part of wiping out the dairy deficit is making sure British consumers have a chance to buy home-produced cheese, yoghurt and butter.

He says labels saying British and Irish are not enough, as Ireland is a key competitor.

“As a country we do dairy really well,” Mr Clothier says. “What we do not do well is protect our market.”

The current crisis raises the question: Can farmers’ still fight for a fair price?

When the Milk Marketing Board was scrapped in 1994, UK farmers lost a lot of their bargaining power.

Few call seriously for its revival but now all-powerful supermarkets are more able to dictate terms and squeeze producers’ margins.

Tony Evans, partner and head of dairy business consultancy at The Andersons Centre, says consolidation of milk buyers could help.

“We would be a far better industry in total if there were less people competing to sell their supplies,” he says. “We have got four or five major milk processors and retailers can bounce from one supplier to another.”

Farmers can take action themselves, like joining buying groups to save money on inputs or raising their voice in a co-op processor.

Since 2012, British farmers have also been able to form producers’ organisations – groups that agree contracts on behalf of their members and can work well to run added-value projects. But not a single one has been formed so far.

Get better on the farm

More than ever, British farmers have to compete with the best.

Consultants agree the focus must remain a keen eye on costs and rethinking the business structure to maximise the milk price and stay in the black even when markets fall heavily.

Mr Evans says businesses should use an average milk price from the last four or five years in their budgets and build in a return of about 10% to protect them from sliding markets.

“If we are going to open up and trade in the world, or if we are to improve our balance of payments in the dairy sector, we have got to get used to building businesses that are more robust,” he says.