Dairy farmers are on track to meet government targets for cutting carbon emissions, countering criticism from environmental campaigners, according to a new report from Kite Consulting.

The study, commissioned by retailer Asda and milk processors Arla Foods UK and Dairy Crest, calculated carbon output had fallen by 12% over the past decade as milk producers had become more efficient.

A further drop of 9% was likely over the next four years, said Kite’s managing partner John Allen.

This meant the dairy sector would have done better than the government’s target of reducing the level  of domestic emissions in 1990 by 20% before 2010, said Mr Allen. 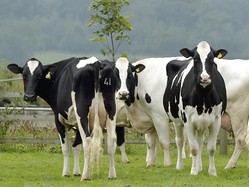 Chris Brown, Asda’s head of ethical sourcing, said he had commissioned the research because he was frustrated with the lack of data available to defend the industry from its detractors.

“I think this is a stunningly strong statement that that we will be able to meet Kyoto statements.”

“Only about 20% of dairying output comes via man-made factors like electricity fuel, feed or chemicals,” he said.

‘Regardless of human existence’

“The bulk of it comes from through entirely natural rumination or nitrogen cycles.

“Both of these have gone on for millions of years and occur wherever ruminants roam the earth and would be going on, regardless of human existence.”

improvements in production efficiency the main way, alongside carbon-friendly nutrition policies and better use of manure.

Carbon-efficient farms could drop their “carbon loads” to below 600g/litre of milk production by 2010, with even less efficient farms falling below 800g/litre, he reckoned.

Positive use of co-products

Mr Allen said it was worth noting that reports from some major dairy exporting nations, which claimed their milk had a low carbon footprint despite the distance travelled, had not included methane or nitrous oxide emissions in their figures.

Kite’s figures, which even include the carbon produced during the manufacture of machinery and buildings used by milk producers, do not take in to account the sector’s positive use of millions of tonnes of industrial co-products, like brewers grain, that could otherwise end up in landfill sites.