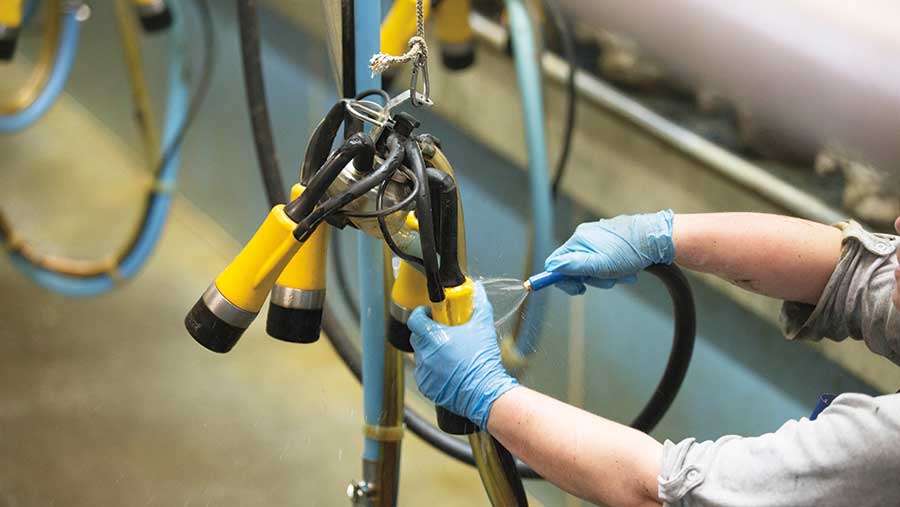 A farmgate milk price of 26p/litre effectively means even farmers performing well are now sitting on a cashflow cliff edge.

Further cuts in price will plunge them over and into freefall. This will be devastating to autumn milk volumes in the first instance, and then to the long-term sustainability of the industry.

See also: Where to buy milk direct from farm

The sector is entering another cost:price squeeze period and this at a time when the cashflow position of many producers has not fully recovered from the deficit accumulated during the downturn of 2015 and 2016.

The cliff edge can be seen by comparing the two milk price:cash flow scenarios shown in the graphs. The first is a price fall (or stabilisation for some) to 26p/litre by May, and the maintenance of that price through to March 2019.

This gives an average milk price of 26.08p/litre for the milk year.

The second graph imagines a price crash where the price drops further to 22p/litre to June this year and stays there through to March 2019. This produces an average milk price of 22.5p/litre for the milk year.

The 22p/litre price has been taken as an example, and is not an indication Kite believes the price will fall to this level.

The 26p/litre graph shows that farms will be moving into negative monthly cashflows from March, and by September the surplus built up through 2017 will have been eroded.

The deficit for the year reaches its peak at -£6,000 in December. Cumulative cash turns positive at the start of 2019, but this will be short-lived.

The 22p/litre graph shows that cashflow will be negative from March 2018, and farmers will be in a deficit until the BPS is received.

The peak rolling cash deficit would reach £49,000 by December 2018, close to the -£54,000 recorded at the bottom of the last trough in December 2016. The arrival of the BPS only reduces the cumulative loss by £15,500 and this is only temporary, as March 2019 sees another sharp drop-off as losses continue.

A further price reduction to about 25p/litre will see significant consolidation in the industry with an increase in the number of producers leaving the sector, both voluntarily and at the hands of the banks.

Without funds for reinvestment, the trend of reduced capital expenditure and lack of extra capacity will continue. Both will result in reduced milk flows in the third and fourth quarter of 2018.

We have just come out of one of the worst downturns in a generation, where businesses have survived by cutting back investment and repairs.

While farmers are on a cashflow cliff edge, the sector is on a volume cliff edge. A milk price of 25p/litre will put a fragile supply chain in jeopardy.

Remarkably few milk producers left the sector in the last downturn, but each price slump reduces their resilience. Retailers and processors really need to recognise this growing risk.