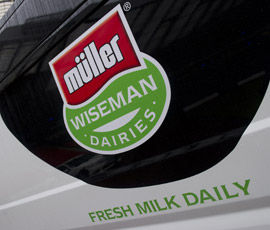 DO NOT USE OLD BRANDING

The head of Muller Dairy (UK) is calling for debate on contract notice periods as the review of the voluntary code of practice gets under way.

Ronald Kers, chief executive officer at Muller Dairy (UK), said competition for milk was being restricted, with many co-operative members wanting to switch buyer but being held back by a 12-month notice period.

Standing still was not an option, said Mr Kers, speaking exclusively to Farmers Weekly as the industry prepares to assess the effect of the code one year on from its publication in October 2012. If there was no movement on the exemption allowing co-ops to hold their milk producers to 12 months’ notice while others must offer a three-month period, the industry would suffer, he said.

One year on from publication, he said the code had only partially changed milk buyer behaviour.

What do you think the dairy voluntary code has achieved?


Has it helped your business?


What would you like to see from the review?

“If in this review period we don’t find a solution, the industry will take a backwards step – we can’t continue to live in a world where some are on three months’ notice and some on 12 months – it’s uncompetitive. We will certainly have to react if there is no change to the voluntary code. We will be reviewing all options.

“A short notice period keeps everyone on their toes – the market would be moving quicker and the price would be changing quicker. If you’re not competitive people will vote with their feet.

“We know that if we make the wrong decision in terms of competition, we will lose producers. If a co-op is truly farmer-led, they should have nothing to fear from a three-month notice period,” he said.

The long wait for repayment of investment and the methods for valuing co-op shares are often further factors preventing producers from switching buyers, said Mr Kers.

“It’s very important that farmers’ views on long notice periods are heard – one of the things we hear across the country is that they are not happy about it. Buyers should test with their farmer suppliers what they want.”

This call to level the bumpy playing field of UK milk supply comes against a background of increasing competition for milk. Muller Wiseman is looking to sign up at least another 400m litres in the next four years. Its expansion plans include replacing imported milk products as well as building dairy exports.

Building its milk field is a big part of that, making the company less reliant on third-party suppliers, usually brokers. The recruitment of new producers means the share supplied by third parties has fallen to about 25% of its raw milk requirements compared with 30% a year ago.

“We targeted 100m litres of new milk this year and we have already surpassed that number,” said Mr Kers. Had other producers not been on long-term contracts, the figure would be higher, he said.

So why did non co-op processors agree to an exemption from the code’s three-month notice period in the first place? “We didn’t see another way to get the code signed,” said Mr Kers.

The Muller Wiseman business had gained real momentum, he said, with investment of about £500m in the past two years. “We are determined to be the biggest and best dairy company in the UK.” But it had also been more challenging than expected.

A fire at the Droitwich plant in mid-October affected 13-14% of the UK’s liquid milk supply, posing a massive logistical challenge for management and staff. With a massive effort and a lot of co-operation from customers and others, short-term solutions had been put in place and the plant will be processing some liquid milk in the next few weeks, while full operation will take up to four months to restore.

The company recently increased capacity with the purchase of Telford yoghurt-maker Nom Dairy and is building the UK’s biggest butter plant to reduce its exposure to the volatile cream market. The Market Drayton plant will produce up to 40,000t of butter a year – the UK imports about 100,000t of butter annually.