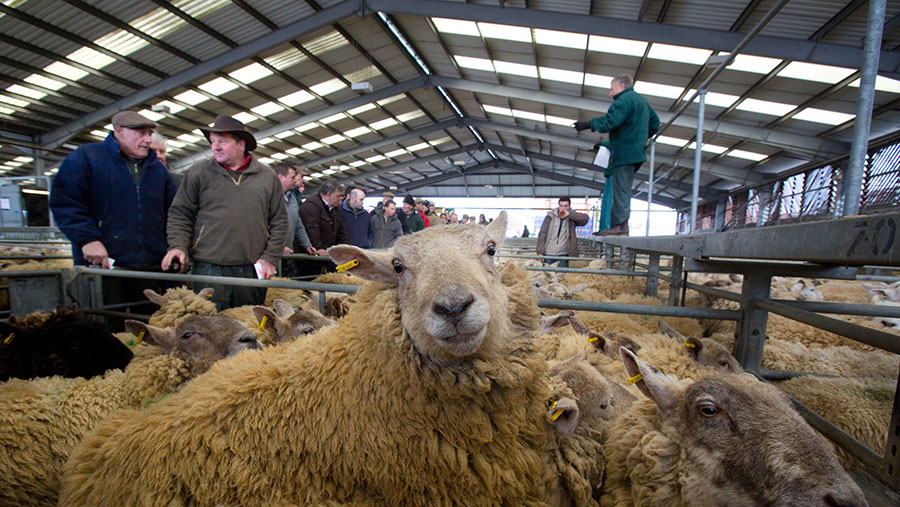 Intense competition for British lamb has seen year-on-year values soar by up to 45% at auction markets this week, while the latest deadweight prices have hit their highest ever level.

Figures released by the AHDB show the GB deadweight old season lamb (OSL) SQQ recorded its 22nd week of consecutive growth – gaining another 7.5p, to 536.7p/kg in the week to 31 March.

The measure now stands at the highest ever level across both the new season lamb (NSL) and OSL series. The previous high was recorded in May 2013, the AHDB said.

Estimated slaughterings for the week stood at 231,700 head, 3% above the same week last year.

The trend has continued through the past week with prices up to 251.42p/kg by Wednesday 4 April, 26.07p above week earlier levels and 10p above the previous day.

The soaring prices have been seen across the country, according to Livestock Auctioneers Association executive secretary Chris Dodds.

“Competition between buyers at livestock markets is intense and we have seen them driving up the price by 60-70p/kg year on year,” Mr Dodds said.

He suggested that was due to strong demand for British lamb combined with a lower supply after the harsh winter and spring weather.

“The demand has been driven by retailers switching to British. That is especially good news given the uncertainty over Brexit,” Mr Dodds said.

“Relatively high global prices and a weaker sterling have also made imports less attractive,” he added.

The buoyant market showed no signs of abating, he said, with old season supply dwindling and a slow changeover to new caused by losses and poor growth rates in harsh weather.

In the south east of England auctioneer Elwyn Davies said Ashford market in Kent had seen 35-55kg hoggets average £112 a head. That is 45% higher than the same price a year ago when the average was £77 a head for the same weight.

“We are optimistic that the buoyant market will continue because demand is high both for exports and the home market,” Mr Davies said.

“I can’t see that changing any time soon because the supply of NSL is going to be slow.

“Fewer people produce early lamb in the south because input costs are so high that it doesn’t make sense to push them hard,” Mr Davies suggested.

At the opposite end of the country Jonny Williams, senior livestock procurement officer for farmer marketing group Farm Stock Scotland, said price rises had been similar to those at Ashford.

“We are seeing the highest levels for many years driven by a strong demand for Scotch lamb.”

“I don’t see that changing before the Royal Highland Show [at the end of June] because NSL supplies have been hit so hard,” said Mr Williams.

“There have been big losses of stock in the severe weather so that will hold back supply,” Mr Williams added.

The situation was repeated in North Wales and the Welsh borders.

Livestock Auctioneers Association chairman John Brereton who sells at St Asaph and Oswestry markets said demand for lamb was strong across all weight ranges and breeds.

“Competition between buyers at the markets even for the heavy weigh ranges has been intense and fuelled further by an excellent export trade.

“I am optimistic this buoyant trade will not slow down,” Mr Brereton added.