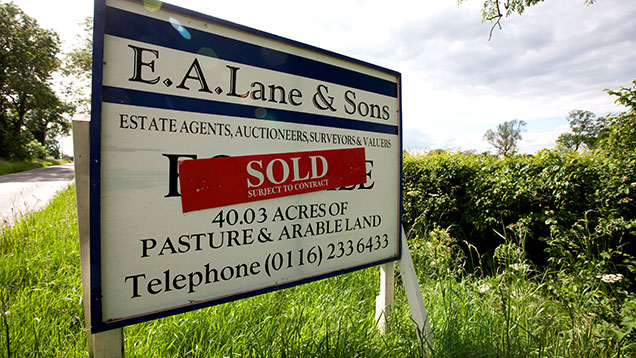 Farmers in some regions of England and Wales are selling off small parcels of land to clear debt and create capital that can be used to streamline their businesses.

Land agents report that increasing scrutiny of farm accounts, commodity price volatility and securing affordable lending is causing some enterprises to rethink their assets, although the picture varies geographically.

See also: Smallholdings for sale in the new year

Cash from land sales is typically being invested in more profitable areas of farm businesses, or to fund diversification opportunities.

Farmers Weekly spoke to a number of land agents to find out how widespread the trend is.

“We’ve had several private sales where farmers have sold between 20 and 50 acres to clear an overdraft or provide working capital for other projects. There are examples where the banks have not called in the debt but have certainly applied some pressure to reduce the farm’s overdraft which has led to sales.” Chris Leney, Robinson & Hall LLP

“The 2014 UK cereal harvest has not quite bridged the gap in many bank accounts as was hoped. For some, this has meant an impromptu conversation with the bank manager to extend the overdraft or perhaps a short-term loan. In some more extreme cases, we are beginning to see banks force a sale of land to service escalating debts.” Sam Skinner, Fisher German

“The discussions we have had with clients looking to dispose of property in 2015 are all linked with capitalising on high market values, retirement, death or a lack of succession. There is certainly greater financial pressure on our clients but as yet this has not resulted in additional property coming to the market.” Robyn Peat, George F White

“Most farmers are sufficiently resilient to take a more long-term view. After various CAP reforms, aimed at stripping away market protection, it is not surprising that farmers will have to get used to volatile markets. Risk management is already a key priority for most progressive farmers.” Andrew Ransom, Stags

“We’ve seen a bit of farmers selling an offline block which is not core to the main farming business and using the proceeds to either invest back into the farm or to clear overdrafts.  Farmers who own 100-300 acres are perhaps struggling with the drop in commodity prices which has squeezed those at that smaller scale, but we’ve not seen many examples of forced sales.” Matt Sudlow, Strutt & Parker

“Several blocks of land we marketed in 2014 were as a result of off-lying land being sold to acquire land adjacent to the core farm holding to consolidate the farming package and increase efficiency of managing stock enterprises by reducing travelling.” David Powell, Powells

“The only pattern, if any, we can see is an accumulation of a number of hard years and general pressure where businesses have struggled over a long period of time. Most farm businesses have tried to ride these pressures out but the consequence is that there is little left in the pot for restructuring or investment, thus leading to sale of small blocks of land.” Tim Parsons, H&H Land & Property,

“There is no more evidence of this than in any previous years of farms selling off land because of financial pressure. We are seeing an increased number of enquiries from English and Welsh buyers who see Scotland as offering better value for money than farms in the South.” Simon Brown, CKD Galbraith