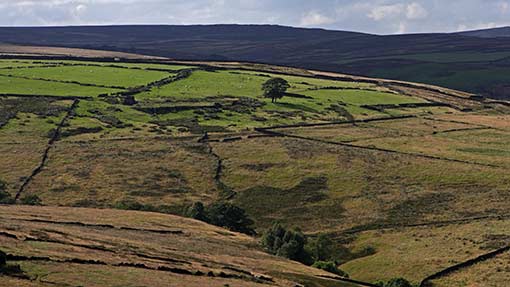 Increasing moorland payments would have a limited impact on projected farm business income for lowland farmers, according to a DEFRA analysis.

The government has sought to inform the debate about increasing moorland payments as part of CAP reform by running an analysis of projected farm business income.

In its consultation last year DEFRA proposed an 82% uplift in the moorland rate for upland farms, to help compensate for the end of the upland stewardship scheme.

But the idea sparked controversy with the NFU insisting that while it was not against government proposals to transfer money “up the hill” from the lowlands, it needed to see more evidence of the wider effects of an uplift.

An analysis paper was circulated by DEFRA this week which looks at the implications of a payment rate of €70/ha for moorland and €244/ha for lowland and SDA land. It assumes if moorland payments were left at the current rate of €37/ha then the lowland/SDA rate would be €247/ha. However, the document stresses than an “optimal” payment rate should not be inferred from the analysis.

The document looks at a range of farm types and concludes there is little difference in farm business income with or without a moorland uplift.

Robin Milton, chairman of the NFU’s upland farming group, told Farmers Weekly that a final decision could now be made on a reasonable evidence base.

“I am pleased DEFRA has done the analysis as we asked it to,” he said.

Mr Milton said it appeared upland farmers would be looking at some level of uplift in their Pillar 1 (direct) payments – but it was still to be determined what level was appropriate.

He added: “The document also shows that direct payments are not the panacea for all ills and not going to solve all problems [facing the uplands]. We do need to look at the wider situation and the long-term sustainability of the hills.”

The analysis paper emerged just hours after the Tenant Farmers Association warned DEFRA and the Welsh Government they risk “disaster” unless they reconsider their plans for moorland payments.

The TFA says a robust set of criteria must be introduced to make sure moorland payments can only be claimed by active graziers.

“There will need to be a robust set of criteria to ensure the payment is only received by active graziers and is not siphoned off to line the pockets of other landowners,” said TFA chief executive George Dunn.