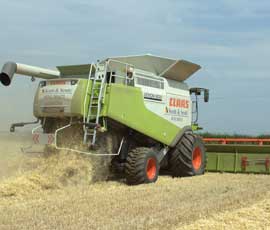 The area down to wheat this year is the lowest in 30 years, at just 1.5m hectares, according to June census figures.

DEFRA has released provisional estimates for crop areas in England and, as expected, they show dramatic changes on 2012.

Winter barley also fell 22% to 257ha, as many farmers switched to spring varieties.

Despite a 5% fall in the oilseed rape area to 674,000ha, this year is still the second highest on record.

The HGCA largely anticipated these results. In its planting survey of 3,473 farmers – compared with DEFRA’s 26,000 – it estimated wheat would fall by 19%, total barley would rise by 38% and oilseed rape would fall by 10%.

DEFRA puts the fall down to a number of factors, almost all of which were related to the weather.

“Failed crops due to pests and waterlogged fields have been another contributing factor to the changes between crop categories. This resulted in some farmers planting spring-sown crops instead of winter crops and others leaving more arable land out of production.”