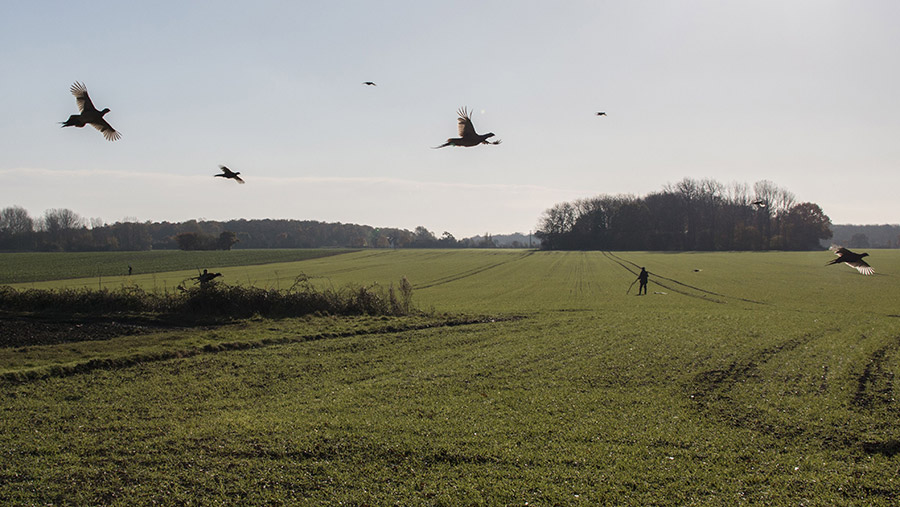 The game shooting industry is seeking clarity from government over how it plans to ease coronavirus lockdown measures ahead of the start of the season.

However, where the use of a gun is essential to control pests, or for humane dispatch, this is still allowed.

Fifty percent of shoot owners are cancelling or scaling back their planned shoots this season as a result of Covid-19, a survey from Knight Frank shows.

See also: Farmers urged to back move away from lead ammunition

Although half intend to carry on with their shoots as normal, 33% are scaling back and 17% have cancelled, according to Knight Frank’s 2020 Shooting Season Survey.

However, some 55% have taken deposits allowing them to proceed with ordering birds.

Orders for poults are usually placed around now, but uncertainty about the availability of birds and the possibility of shoots going ahead is creating issues for game suppliers and shooters.

In July, pheasants and partridge are released on shoots and shooting gets under way in the autumn.

“There is a huge uncertainty ahead for many rural businesses,” said Alastair Paul, a partner at Knight Frank in the rural asset management department.

“Shooting is by no means alone in this, but, with long lead-in times, major decisions and significant financial commitments need to be taken months or sometimes even years ahead of the season.”

Only 40% said they had terms of business that protect them if they have to cancel days before the season.

And only 7% appear to have insurance to cover cancellations.

However, there are some encouraging signs.

Half of respondents said that the demand for days has remained the same.

While three-quarters of those still offering shooting plan to keep their costs the same.

By far the biggest concern was whether or not the government would impose moving restrictions during the shooting season, followed by the practicalities of observing social distancing.

In terms of staffing, very few estates reported that gamekeepers had been made redundant, furloughed or had their salaries reduced.

“We are pleased to see that shooting in the main appears to be pressing on,” added Mr Paul.

“Hopefully as the next few weeks unfold, the government will start to reveal details of its lockdown exit strategy, which will provide some guidance on how shoots can operate.”

Knight Frank said it decided to conduct the survey to offer its clients a general sense of direction and provide evidence to those making difficult decisions ahead of the shooting season.

Meanwhile, the British Association for Shooting & Conservation (BASC) is seeking assurances from the government that it will consider the long-term future of shooting and its conservation benefits as it considers steps to relax the Covid-19 lockdown.

In a letter sent to Defra secretary George Eustice, BASC chief executive Ian Bell wrote: “We fully support the government’s fight to defeat Covid-19, protect the NHS and minimise the number of infections and deaths.

“We all look forward to the day restrictions on outdoor recreations, such as shooting, are lifted or changed.

“Shoots are already facing difficult choices ahead of this year’s game-shooting season.

“Any relaxation of the current shutdown would help build confidence in the future.”

Police forces have been blocking essential fox control during the lambing season over concerns it may flout government guidance on coronavirus.

The British Association for Shooting & Conservation (BASC) said it had received complaints from members in some areas that they have been warned by officers not to undertake pest control by their force unless it is their “profession”.

This stance sits outside the guidance BASC issued after seeking clarification from government, which says anyone can conduct essential pest control to protect crops or livestock with the landowner’s permission.

“But with lamb season in full flow, a refusal to allow essential fox and crow control is of significant concern for farmers’ livelihoods and the lamb’s welfare.”