Farmers have been industrious during the pandemic, launching diversifications and adding value to their core products.

Farmers Weekly spoke to two farming families who have done just that. One has added a milk vending machine, and the other launched a mobile food outlet. 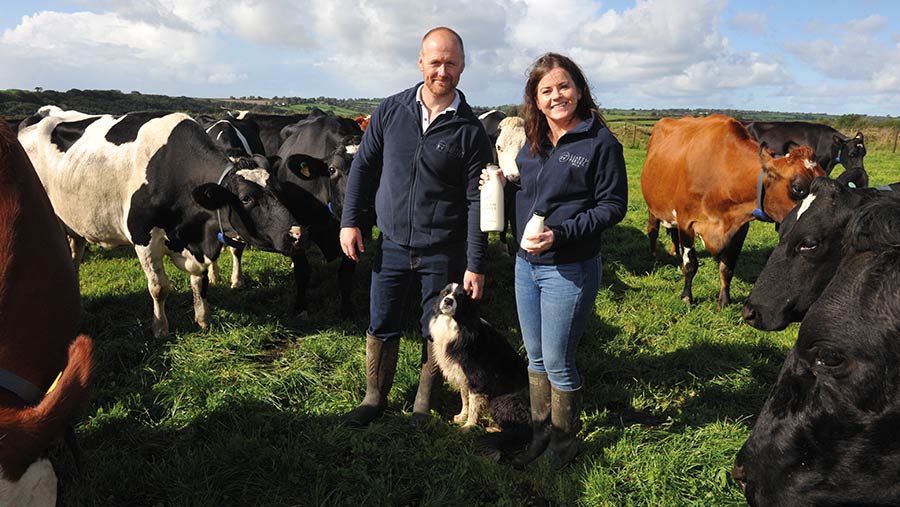 The lane-end milk stand from the era when Roger James’ grandfather was dairy farming at New Moat, Pembrokeshire, has been replaced with a converted garden shed to house a milk vending machine.

Churns from those bygone days have been superseded by a mobile chiller vessel that Mr James and his partner, Angharad Edwards, fill with fresh milk from their cross-bred herd and haul to the end of the lane after morning milking to refill the vending machine.

While there are some connotations with the past, it is anything but a retrograde step: milk is sold for £1.20/litre, many times more than the price the business receives for its bulk milk sales.

Mr James farms Moat Grange in partnership with his father, Robert, and brother, Simon, with a good team of local staff and support from Miss Edwards, who works as a director on Ffermio, the S4C farming programme produced by Telesgop.

The family produce milk from a herd of 280 cows bred from a three-way cross of British Friesians, Montbeliardes and Norwegian Reds.

She was keen to add value to the farm’s milk after viewing the trend towards locally produced food through the lens of her media role.

“People really do want to know where their milk comes from,” she says. “It’s all about the story, and from our point of view it is about future-proofing the farm.

“As farmers, we have to take the initiative to market our own produce – if you can build a good brand, people will support you.”

A trend has emerged with sales: the over-40s buy the fresh milk, while the under-40s spend their money on milkshakes; sales average 60 litres a day.

The couple deliberated at length before setting the price point at £1.20/litre of pasteurised milk compared to the £1 charged by some of the other vending businesses in the UK.

“It is our responsibility as dairy farmers to put a true value on milk. It is a premium product and for too long it has been undervalued,’’ Miss Edwards insists.

“It is good to see so many vending machines across Wales; we all have that same motive.’’

It has been a significant investment – about £60,000 – and, although Mr James was at first apprehensive to go down the route of direct sales, it has put a spring in his step as a farmer.

“We are going to try to do something new every year from now on,” he says.

He is optimistic for the future of family-run dairy farms. “I think family farms will do OK. There is definitely more support for locally produced food and reducing food miles and seeing cows out at grass – people like to see that.’’ 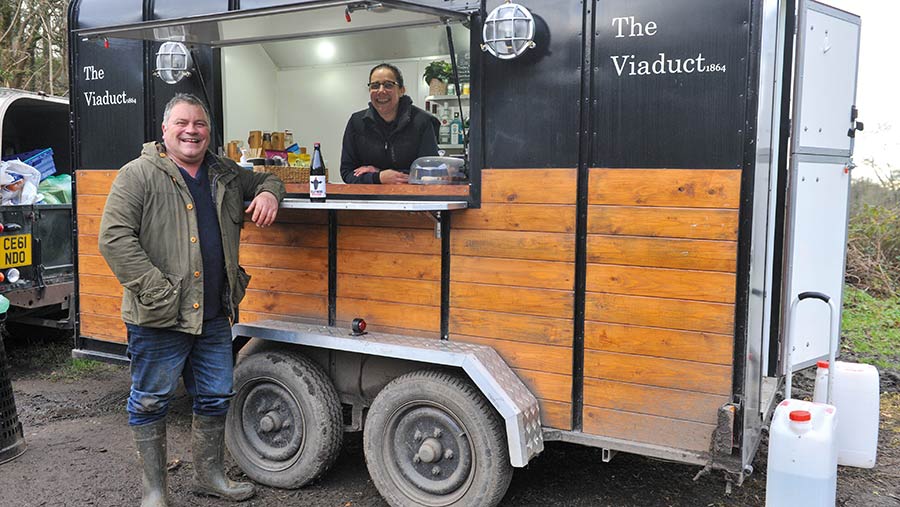 A family-run dairy farm has converted the livestock box it once used to transport cattle to market into a mobile food outlet, recouping the £15,000 it invested in the conversion in just two months of trading.

Owen and Coral Tamplin were inspired to establish a food outlet on their land at Cwmnofydd, Machen, when they noticed how popular the area was with walkers during the 2020 lockdowns.

Mr Tamplin’s family have been farming for the past 125 years and now produce milk and run a flock of breeding ewes.

Launching a food outlet provided an opportunity to diversify to generate extra revenue.

The Tamplins commissioned a Swansea-based company to convert an old trailer into a modern catering vehicle, fitting it out with a coffee machine, fridge, freezer and cooking facilities.

The business, The Viaduct 1864, operates next to a viaduct on their land and takes its name from the year that structure was built.

The space is fully licensed and has hay bales and picnic tables as seating.

Since they set up the business, the Tamplins have added pigs to their farming enterprises, establishing a herd of Gloucester Old Spots so that they can produce sausages to sell through the food outlet.

From the outset, the couple has been keen to support other local food producers. Beef and lamb burgers and bread come from a local butcher and bakery, and the beer and cider on sale is produced in south Wales. The farm also hosts a mobile farm shop.

Mr Tamplin says running the business has been an “eye-opener”. “We get paid straight away – that’s something we are not used to as farmers.’’

Mrs Tamplin, a chemistry teacher at Howells Girls School, Llandaff, has cut down her working hours to allow her time to run the business; when she is teaching, it provides employment for two local people.

During the winter, the food outlet is open at weekends only, but additional activities have been organised at the site, including craft markets and music events.

The family has made the land more accessible for walkers, too, creating a one-and-a-half-mile circular route linking up with the well-established Machen Forge Walk.