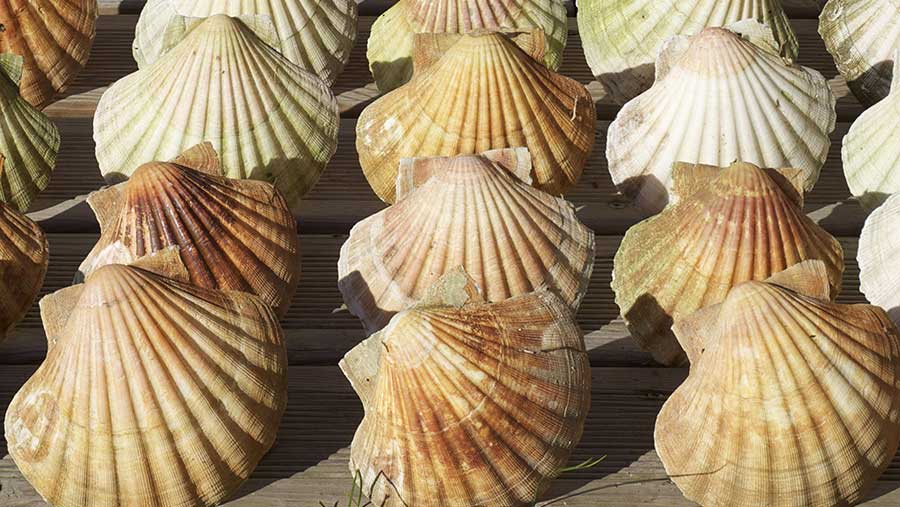 Devon farmer Richard Haddock says a fertiliser made from unwanted scallop shells could be a way for struggling farmers to cut their costs.

Mr Haddock, who runs a successful farm shop as well as a waste recycling business at near Brixham, is setting up a new business turning 100,000t/year of unwanted scallop shells into a soil improver.

He said every year the fishing industry was left with huge quantities of scallop shells as an unwanted byproduct.

The shells cannot be thrown back into the sea and until now the fishermen have had to pay up to £350/t to have them dumped in landfill sites. Alternatively, they are shipped to Scotland for building tracks through pine forests.

Mr Haddock said he had spent four years trialling the use of crushed shell as a fertiliser and had seen good results on his own farm.

He has been able to stop using artificial fertiliser on his grassland altogether, getting good results from using a combination of farm manure and shell crushed into a powder.

The shell is applied in granular form to his arable ground, along with a limited amount of bagged fertiliser, and trial analysis due later this year is expected to confirm increases in barley yields as a result.

“It’s already winning on two fronts – taking costs out of production for both fishermen and farmers,” he said.

“The additional bonus is that the product is entirely organic, which broadens its appeal immensely, and which is why we are already getting inquiries from organic growers across the country.

Shells being crushed for fertiliser.

“There’s huge pressure on both these important West Country sectors at the moment, and anything that can be done to remove costs is going to make them more capable of surviving in their own very tough trading environments.”

Mr Haddock told Farmers Weekly he was currently having modifications made to his specially constructed shell crusher, but he expected to be fully operational in the production of the product – similar in properties to calcified seaweed – from Easter.

The soil improver will be officially launched later in the year and is expected to sell for £120-£150/t.

To date, Mr Haddock has invested more than £250,000 of his own money in the project, although he has recently secured another £80,000 in grant funding.